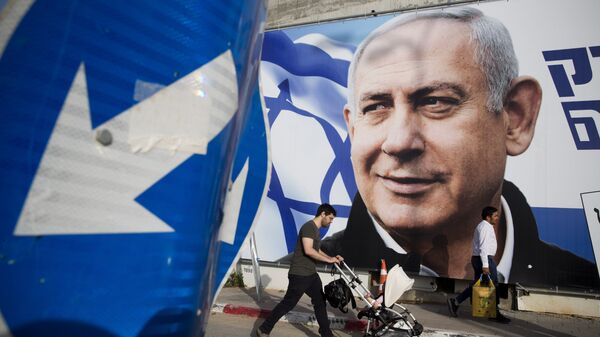 MOSCOW (Sputnik) - The likely victory of Israeli Prime Minister Benjamin Netanyahu's Likud party in recent parliamentary elections threatens the Palestinians and Syria, as the Jewish state is likely to continue expanding its territories, Secretary General of the Democratic Front for the Liberation of Palestine Nayef Hawatmeh has stated.

"This is a plan that Netanyahu put forward, and [US President Donald] Trump supported it. It is about the creation of Greater Israel from the sea to the Jordan River. If he wins, Netanyahu will also annex the West Bank as he promised. Thus, there are growing threats for Palestinians, and the future threats also target Syria", Hawatmeh said at a press conference at Rossiya Segodnya International Information Agency in Moscow.

He explained that Syria was endangered by Trump's supporting Israeli claim to Golan Heights that are considered to be an occupied Syrian territory by the international community.

Netanyahu's Main Election Rival Concedes Defeat
The statement comes after Trump called Netanyahu on 10 April to congratulate him on his election victory and pledged the US support for the Jewish state. On the same day, the US president told reporters that Netanyahu's win would help advance the peace process in the Middle East.