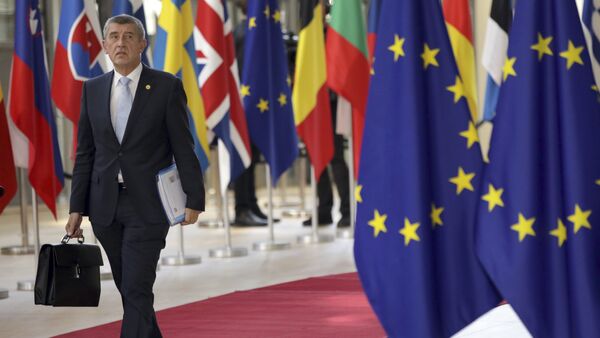 MOSCOW (Sputnik) - Czech Prime Minister Andrej Babis said that he supported the idea of European Council President Donald Tusk to consider granting an up to a year-long Brexit extension to the United Kingdom.

"For me the proposal of Donald Tusk [to consider an extension of Brexit] until March next year is fine", Babis told reporters ahead of the meeting in Brussels.

The prime minister arrived in Brussels on Wednesday for the Special European Council. Heads of 27 EU member states, excluding the United Kingdom, have reached a consensus on Brexit delay, which has been requested by UK Prime Minister Theresa May, the European Council head, Donald Tusk said, adding that he would proceed with discussing the extension with May.

"EU27 has agreed an extension of Art. 50. I will now meet PM @theresa_may for the UK government's agreement", Tusk wrote on Twitter late on Wednesday. A diplomatic source told reporters that the EU leaders had preliminary agreed to delay Brexit until 31 October with a number of conditions.

Macron Says Brexit Delay Beyond 30 June Could Put EU at Risk - Reports
After the United Kingdom failed to agree on the Brexit deal by the initial 29 March deadline, Brussels extended the deadline until 12 April in a bid to give UK lawmakers more time to find a way out of the Brexit deadlock or leave without a deal.

On Tuesday, the UK House of Commons approved Prime Minister Theresa May's plan to postpone the country's withdrawal from the European Union from 12 April to 30 June.

However, certain EU leaders have expressed their concerns about the extension of Brexit deadline. In particular, Swedish Prime Minister Stefan Lofven and French President Emmanuel Macron have reportedly said that long extension of the Brexit puts at risk the legitimacy and integrity of the European Union's institutions.