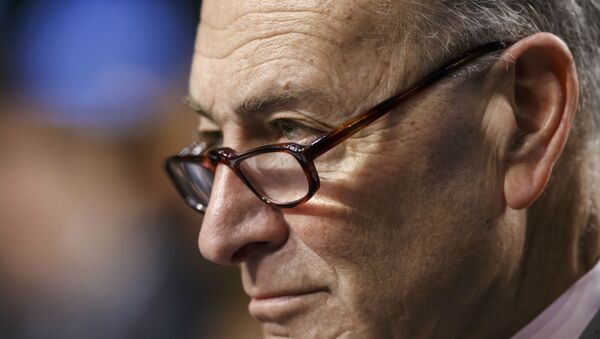 US Senator Chuck Schumer, who leads the minority Democrats in the Senate, has demanded that Attorney General William Barr retract comments he made suggesting spying on Donald Trump's 2016 presidential campaign "did occur."

The New York Democrat tweeted Wednesday that Barr "must retract his statement immediately or produce specific evidence to back it up," saying, "Perpetuating conspiracy theories is beneath the office of the Attorney General."

AG Barr admitted he had no evidence to support his claim that spying on the Trump campaign “did occur.”

AG Barr must retract his statement immediately or produce specific evidence to back it up.

Perpetuating conspiracy theories is beneath the office of the Attorney General.

Schumer's comments follow those by Adam Schiff (D-CA), who heads the House Intelligence Committee. Schiff said earlier Wednesday that Barr's comments "may please Donald Trump, who rails against a 'deep state coup,' but it strikes another destructive blow to our democratic institutions."

"It's unclear to me what Barr was referring to," Schiff told the Washington Post. "All I can make of it is that he wanted to say something pleasing to the boss, and did so at the cost of our institutions."

The casual suggestion by the nation’s top law enforcement officer of “spying” may please Donald Trump, who rails against a “deep state coup,” but it strikes another destructive blow to our democratic institutions.

The hardworking men and women at the DOJ and FBI deserve better. https://t.co/7kJfsU8Rv0

During congressional testimony Wednesday, Barr told lawmakers that "spying on a political campaign is a big deal," and later, "I think spying did occur, yes."

It's possible that with his reference to spying, Barr has in mind Carter Page, the Trump campaign's foreign policy adviser until September 2016. Although it dates to a month after his departure from the campaign, the FBI's warrant to spy on Page from October 2016 notes the agency had been keeping tabs on Page since 2013.

Barr recently received special counsel Robert Mueller's report on his nearly two-year investigation into alleged collusion between Trump's 2016 election campaign and the Russian government. Barr told lawmakers the report found no evidence of collusion, although it didn't totally exonerate the president on other legal questions, such as whether or not he obstructed that investigation with his actions. Democratic suspicion of Barr has grown since those comments, as they have banked years of rhetoric on the idea that Trump had been helped into office by Moscow — posturing that's now proven unfounded.