Russia Ready to Work With Any US President - Putin 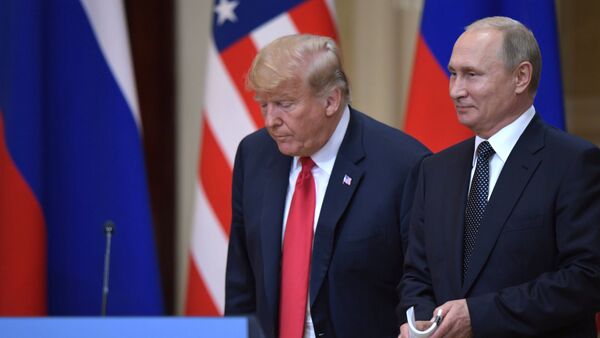 ST. PETERSBURG (Sputnik) - Russia is ready to cooperate with any president chosen by the American people, President Vladimir Putin said Tuesday at a plenary session of the 5th International Arctic Forum.

"Whether we want it or not, it does not depend on us — this is not the area where such categories are applied. We respect the choice of the American people, whoever the president is, and we are ready to work with him,” Putin said in response to the question of whether he wants the current US president to win the 2020 election.

READ MORE: Trump Says He Will Probably Be Talking With Putin on Venezuela

Putin added that Russia was ready to resume full and equal dialogue with the United States, despite disagreements with President Donald Trump.

"If the full-fledged, equal dialogue between the United States and Russia is resumed, including on issues that are of interest for both us and for all mankind, on disarmament issues, we will only be glad, we are ready for this," the Russian president stressed.

Russia has lost only half as much as Europe from the sanctions, Russian President Vladimir Putin said Tuesday.

New US Sanctions to Be Ended If Russia Does Not Meddle in US Elections - Bill
Speaking further, the Russian leader said that Russia did not miss anything in the energy sector, although sanctions hindered development.

"Let's not forget that Russia is a vast country with hydroelectric power capabilities, we are developing and will be developing nuclear energy sector. We have only 16 percent of generation in nuclear energy sector. There are already over 90 [percent generation] in France, and we have only 16, we need to get to 25 [percent] at least. Our neighbors — Finland — is going to build, and so on. So, here we did not miss anything," Putin said at the International Arctic Forum in St.Petersburg.

“Now, as far as sanction pressure is concerned… Partly it hinders [Russia's development], but not in a critical way, even to a certain extent it pushes us to actively develop our own technologies,” the Russian president stressed.

Russian President Vladimir Putin said Tuesday he expected the Arctic factor in the Russian economy to be growing.

“Now the Arctic accounts for more than 10 percent of all investments in the Russian Federation. And we expect that the importance of the Arctic factor in the country's economy will only be growing,” Putin said at the 5th International Arctic Forum "Arctic — Territory of Dialogue".

Russia
Russian President Putin Speaks at Arctic Forum's Session (VIDEO)
He said Russia would this year adopt a strategy on Arctic development until 2035.

Putin said Russia would modernize ports on the Arctic coast and its icebreaker fleet.

The head of the state also noted that the level of Russia's military flight activity over the Arctic region is significantly lower than that of NATO.

"The military flight activity in the Baltic Sea zone in the Arctic is significantly lower than the activity of the NATO countries. Everybody should know it," Putin said at a plenary session of the 5th International Arctic Forum in St. Petersburg.

Putin also criticized NATO countries for refusing to accept Russia's proposal to carry out military flights in the region with active transponders to facilitate the identification of combat aircraft.