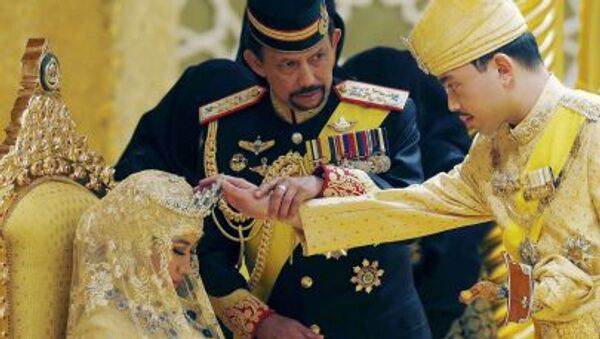 Virgin Australia, the countries second-largest carrier after Qantas, wrote in an email to employees detailing Brunei Darussalam's Sharia Penal Code Order (SPCO) 2013 which applies all persons in the tiny coastal nation, including foreigners and "even when transiting on Brunei-registered aircraft and vessels".

"Given the harsh (including death) penalties being introduced for activity that is legal and acceptable in Australia, the myID (staff travel) agreement between Virgin Australia and Royal Brunei has now been terminated effective immediately," the email stated on Thursday.

But Virgin Australia will continue to allow Royal Brunei to sell seats on its flights, according to a Virgin spokesperson.

Qantas CEO Alan Joyce, one of Australia's openly gay executives, did not comment on his company's policy on travel deals inked with Royal Brunei.

In a press release in late March, the Brunei Darussalam Prime Minister's Office said that it was a "sovereign Islamic and fully independent country" which "enforces its own rule of law", adding that it practised a dual legal system based on Sharia (Syariah) and Common law.

"In fully implementing the Syariah Penal Code Order (SPCO) 2013 from 3rd April 2019, both systems will continue to run in parallel to maintain peace and order and preserve religion, life, family and individuals regardless of gender, nationality, race and faith," the statement read.

But the law would also aim to "educate, respect and protect the legitimate rights of all individuals, society or nationality of any faiths and race", it said.

The code has been lambasted by officials and personalities across the world, with the United Nations slamming them as a "clear violation" of human rights. Celebrities such as George Clooney and musical legend Elton John have called for boycotts on hotels owned and operated in Brunei.

Brunei sultan Hassanal Bolkiah launched the national-level penal code on Wednesday, which includes death by stoning for gay sex and adulterers, and is the first of its kind in Southeast Asia. The microstate also adopted the first phase of its Sharia policy in May 2014 by imposing fines and jail sentences for criminal offences from "indecent behaviour, failure to attend Friday prayers, and out-of-wedlock pregnancies," according to Brunei's Department of Information.