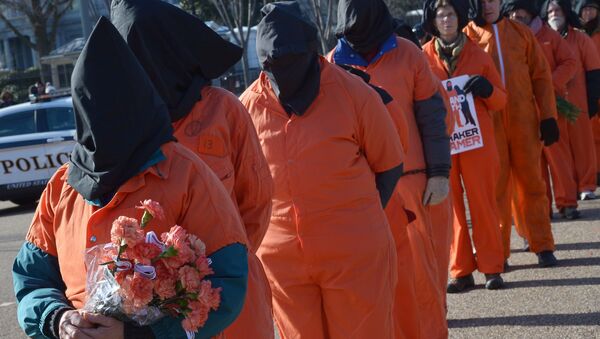 © AFP 2021
Subscribe
The Metropolitan police have launched an investigation into the alleged role that British intelligence officers played in the interrogation of an al-Qaeda* suspect. Sputnik spoke to ex-Guantanamo Prisoner and Director of Outreach at CAGE, Moazzam Begg, in this report.

Sputnik: Britain's Metropolitan police have launched an investigation into the alleged role that British intelligence officers played in the interrogation of an al-Qaeda suspect. Scotland Yard has confirmed that are examining the role of UK intelligence officials during the questioning of Abu Zubaydah at CIA so-called ‘black sites'. How significant is this and is a prosecution to be expected?

Suspicious Parcel Found in Limerick Linked to Letter Bombs Sent to UK - Police
Moazzam Begg: I've sat down with British Metropolitan Police officers several times, giving them evidence of the MI5 and its role in my own torture, helping them to look at other cases of others who have held in Guantanamo and Libya and elsewhere who the British government and the United States, of course, both worked together in the renditions program and torture against them.

So there was an investigation on the Operation Hinton, in the case of Binyam Mohammed and others where the Met police were looking at what took place with each time, sadly, and almost telling me the prosecutions haven't followed and that is because the United States failed to engage and if statements regarding their own role in the torture and they sort of closed out those inquiries. The fact that they've announced this now again, may be newsworthy but in reality, the track record is that they have not managed to prosecute a single person and simply they have not got to let alone go to those who knew otter have known, like Jack Straw and Tony Blair, about the entire process of rendition and Britain security services role in those renditions.

Moazzam Begg: Indeed — it's very embarrassing. For context, Poland, Lithuania, and Romania are countries where Abu Zubaydah was held in secret CIA detention sites facilitated by these countries. Each of those countries, I've named have actually paid Abu Zubaydah compensation for their role in his torture, because the court forced them to. Britain, who I believe had a bigger role in the interrogation, the connection and cooperation with the CIA, have yet to even begin to probe let alone any form of accountability.

So of course, it should be deeply embarrassing that Britain has played a role in the torture of somebody who was mentioned in the CIA Senate torture report in 2014. Essentially, Americans admitting that they were torturing him, and Britain still pretending somehow that it had no real role but there might have been real caucuses that that lessons may be learned through the inquiries that they put through. As far as a crime goes, nobody's been prosecuted for this and this is its very strange. Its kidnap, false imprisonment and torture… those are the crimes.

Sputnik: When we look at these blatant human rights violations and also blatant violations to have a rule of law and the judicial system in the UK. What do groups individuals need to do to ensure that these violations are heard and no longer continue in the future?

Moazzam Begg: This goes back down to what type of governments we want. Are the governments that we have and bear arms of law enforcement and intelligence above the law? That's the crucial question. As the police have said, they said that the Americans didn't cooperate with us in relation to this inquiry. Let's say they didn't cooperate, would we get the similar level of cooperation from the British security services and those who are leading them.

I'm not so sure about the answer to that because once again, there's been no accountability at all, by anyone. There is a connection by the way in the case of Abu Zubaydah, the man who was tortured into giving a false confession that led the Americans to invade Iraq. We've never known, we never even discussed in this country, what was the evidence and where did it come from? Did it come from torture of this individual, so these inquiries have to be a lot more than simply something, where we say we've learned lessons there, need to be prosecutions at the highest level.

*al-Qaeda, a terrorist group banned in Russia and a wide number of other countries.