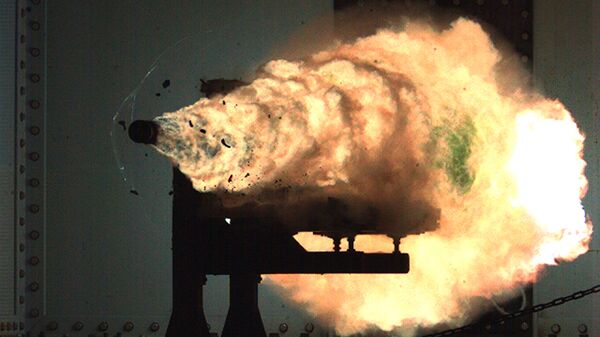 CC BY-SA 2.0 / Marion Doss / EMRG
Subscribe
International
India
Africa
Electromagnetic railguns are among the world's most futuristic new weapons; they can fire projectiles at hypersonic speeds and reach far-away targets without relying on gunpowder or other chemical propellants.

The Turkish defence industry has released a video showing a test of the country’s newest electromagnetic railgun, the Sahi 209 Block II, which came amid reports that the successful test of a similar electromagnetic weapon had been announced by the Chinese People’s Liberation Army Navy.

Developed by the Turkish company Yeteknoloji AS, the railgun is capable of firing 35-mm shells at a distance of 50 kilometres (31 miles), according to the Defence Blog news website.

In a separate development, the Defence Blog reported that the Chinese People’s Liberation Army Navy had kicked off sea trials of its warship-mounted electromagnetic railgun, installed on a Type 072II Yuting-class tank-landing ship called the Haiyangshan.

A video posted in Chinese social media shows the Haiyangshan with an electromagnetic railgun mounted on its bow sailing on the Yangtze River during sea trials late last week.

China Leads Race to Install Railgun on a Warship – Reports
Defence Blog cited several sources as saying that the railgun is capable of striking a target 197 kilometres (124 miles) away at a speed of up to 2.5 kilometres (1.6 miles) per second. The weapon’ sea trials are expected to wrap up by 2023.

In addition to China and Turkey, electromagnetic weaponry is possessed by Russia and the United States.

In Russia, the first railgun relying on electromagnetic forces rather than explosives or propellant, was successfully tested in early 2017.