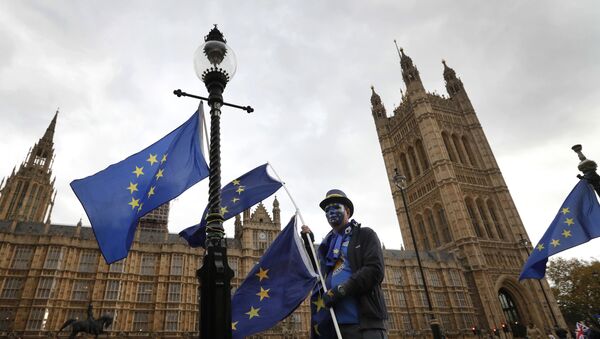 MOSCOW (Sputnik) - The UK Parliament will debate the Withdrawal Deal on 29 March, Leader of the House of Commons Andrea Leadsom said Thursday, but it is unclear if there will be a meaningful vote.

Leadsom told the Commons that the debate would be related to the United Kingdom's withdrawal from the European Union.

The motion is still being finalised, Leadsom said, when asked if there would be a meaningful vote.

"I will say again that it needs to comply with the UK law, the EU Council resolution, and of course the decision that was made by the Speaker", Leadsom said.

Almost 50% of French Would Prefer 'Fast No-Deal Brexit' - Poll
After the government's withdrawal deal and political declaration package were voted down for a second time, House of Commons Speaker John Bercow ruled that the same motion could not be brought for a vote twice in one parliamentary session, unless it has been substantially changed.

The European Council has granted the United Kingdom a Brexit deadline extension until 22 May if the House of Commons can pass the withdrawal deal by 29 March and until 12 April 12 if it cannot.

The deal has suffered two defeats in the UK Parliament, by 230 votes in January and by 149 votes in March.