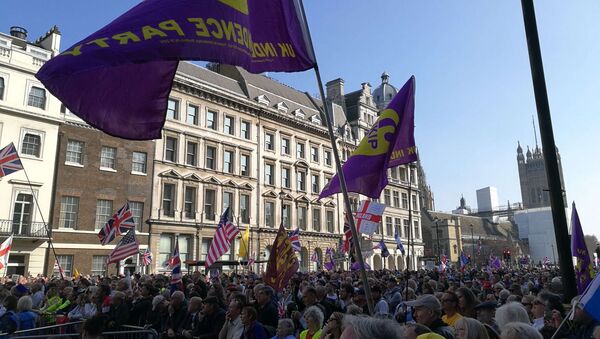 © Sputnik / Demond Cureton
Subscribe
The Leave Means Leave campaign group and its supporters marched from Sunderland to Westminster, with a heavy police presence surrounding the demonstration. Brexit supporters chanted "we shall not be moved" and "bye bye EU" as people poured into the event.

Thousands of pro-Brexit UK citizens protested in front of the UK Parliament on Friday chanting "Leave Means Leave," expressing discontent over the parliament's inability to secure an exit deal for the nation for the third time.

Also in attendance was Brexit Party leader and MEP Nigel Farage, who organised the nearly 285-mile March To Leave demonstration.

Tommy Robinson, whose real name is Stephen Yaxley-Lennon, gave a speech attacking the BBC before playing his documentary ‘Panodrama' while hundreds gathered near the stage. Mr. Robinson is currently an advisor to the UK Independence Party, known as 'UKIP'. 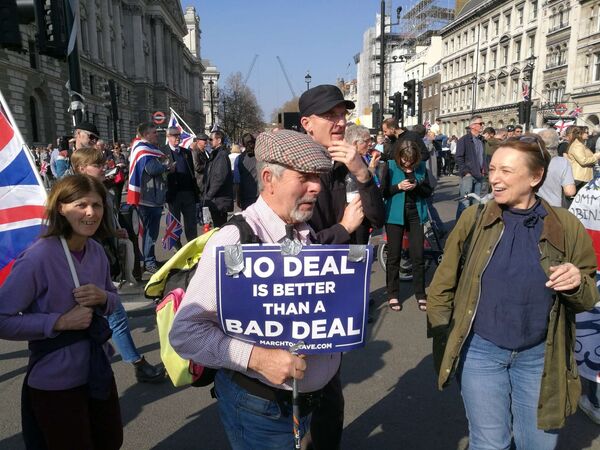 Protesters carried printed signs and came from all walks of life, including military veterans and organisations such as the For Britain Movement and Democratic Football Alliance.

One protester told Sputnik that he against the European Union due to its undemocratic nature, while another rally participant said that he wanted the United Kingdom to have independence and sovereignty, expressing confidence that a second referendum would also result in a pro-Brexit outcome. 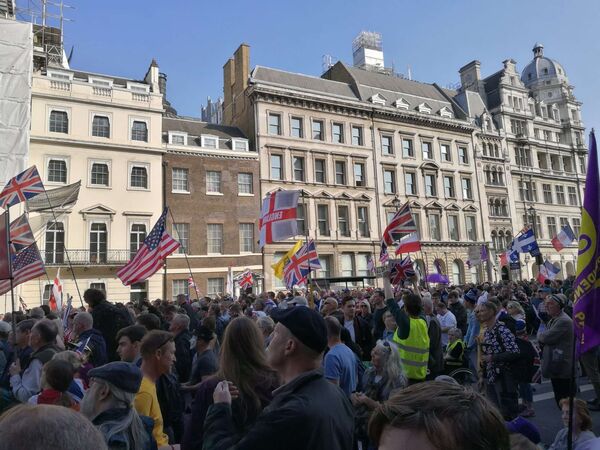 What Does Brexit Day Mean to Campaigners?

Sputnik spoke to one protester that had attended the rally since Tuesday.

"The vote was a democratic vote for the future of my children and grandchild" the protester said when asked about the significance of Brexit. "It means that there will be democracy".

When asked Westminster's Brexit delay, the protester called it "shameful", stating that if democracy moves forward, "it should move forward".

"This was the day that we were told we were meant to leave," she added "It hasn't happened."

Another protestor told Sputnik that the Brexit delay was a "betrayal" and that that there was not much sense in remaining in the EU.

"As someone who voted to leave, it feels very much like a betrayal," the protester said. "To me, I can't see the sense in staying in [the EU] any longer."

The protestor spoke of European corporations accused of bond market rigging that were let off at Britain's expense. "If Europe keeps bailing them out, we'll have to bail them out, and it looks like another bailout for Greece is on the horizon," he said. "It can't go on that way, because you'll end up running out of money." 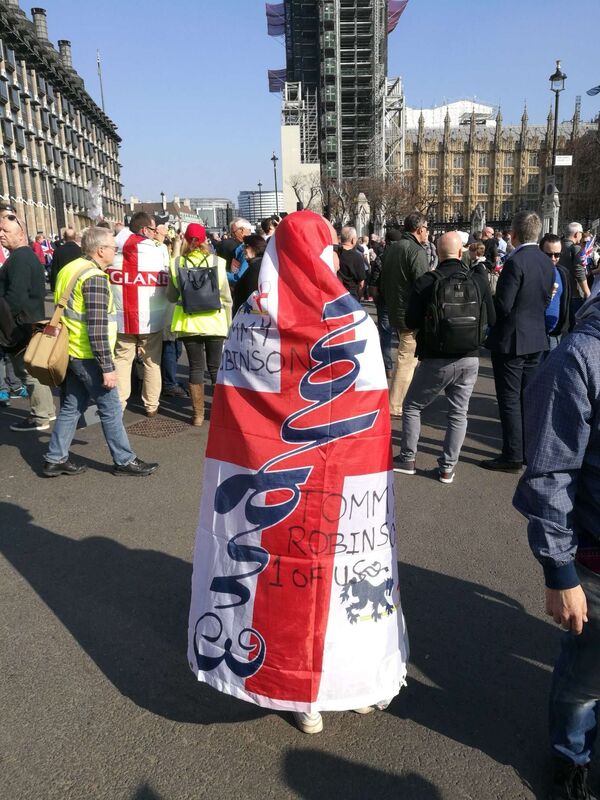 The demonstrator added that he supported the UK's "fishing rights", stating that "sharing them with everyone else doesn't seem fair".

On the subject of migration, the protester added: "We're not building very many schools or hospitals, and if you're adding more people to the population, where's the infrastructure to take in these people? 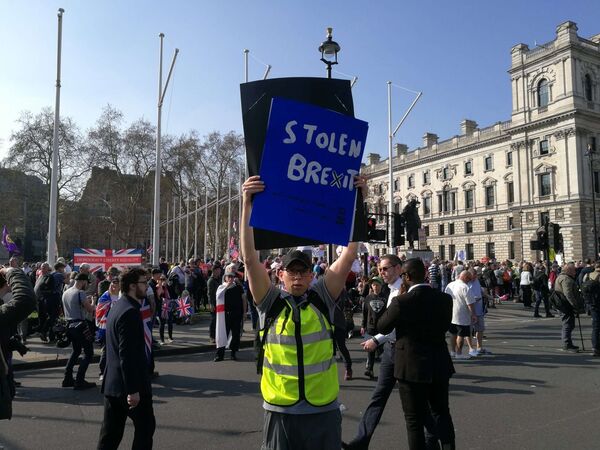 Brexit Extension With UK Holding EU Elections Likely After Commons Vote - UKIP
"It doesn't seem to make much sense to carry on as we are, so to leave would make more sense, but there's obviously a lot of scaremongering going on," the protester said.

"I believe in the people of Britain, its people and products, and the British people will push through to make it work. That's how we've always done."

Sputnik also spoke to a demonstrator with the For Britain Movement, a pro-Brexit, Euroskeptic campaign group based in Bradford.

When asked about the significance of 29 March, the protestor said: "Today the United Kingdom technically stops being a democracy. 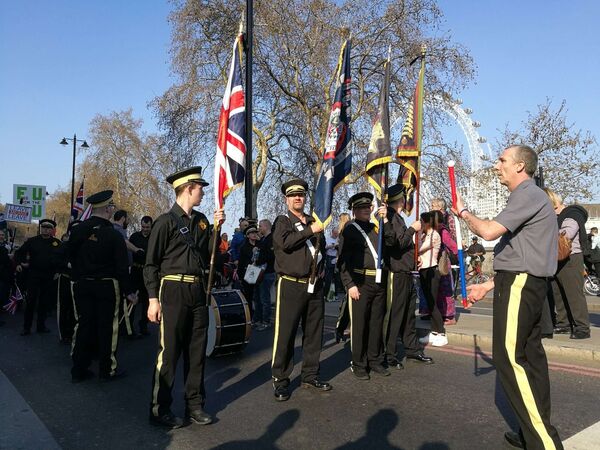 Protesters rally against delay of the Brexit process in London, the United Kingdom on 29 March, 2019 /
© Sputnik / Demond Cureton

"For the last 30 years, we've given power to Brussels based on a referendum in 1975," the protestor said. "In 2016, that admission was withdrawn, and today was the day for leaving."

The protestor added that power had now "passed from the people who voted not to remain in the EU" and as a result of the UK government's handling of Brexit, would "carry on being a member anyways, and will probably continue to be a member for a long time to come".

But Steve Hedley, a member of the National Union of Rail, Maritime and Transport Workers (RMT) who was verbally abused by Vinnie O'Sullivan, a far-right blogger on Facebook, joined counter-rallies in Westminster.

"And that's why every time they come to power they attack us, ban us, imprison us and assassinate our leaders," Mr. Hedley said, adding that his organisation was there today "to stand in solidarity with everyone who is an oppressed minority, but out of self-interest as well."