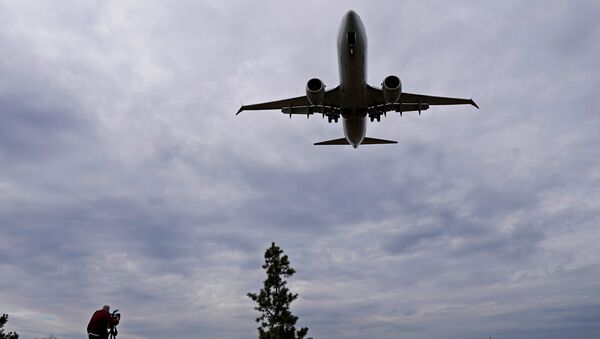 © REUTERS / Joshua Roberts
Subscribe
The American aeroplane manufacturer’s 737 MAX 8 model faced an almost worldwide airspace ban following a deadly crash in Ethiopia, which claimed the lives of the 157 people on board.

Russia has become the latest in a string of countries that have termporarily grounded the Boeing 737 Max 8, Russia's Federal Air Transport Agency announced on Thursday.

It comes two days after Russia's S7 airlines said that it would suspend operation of its Boeing 737 Max 8 jets.

Donald Trump and Boeing CEO Dennis Muilenburg had a phone conversation on Tuesday, in which the latter "reiterated to the president our position that the MAX aircraft is safe", according to a spokesperson for the US plane-maker.

However, the company said that it had recommended to the Federal Aviation Administration the temporary suspension of operations of the affected aircraft "out of an abundance of caution and in order to reassure the flying public of the aircraft's safety".

The aviation safety agencies of the European Union, Australia, the United States, Canada, China, Singapore,  Malaysia, Turkey and Oman all suspended flights in their airspace by Boeing’s 737 MAX airplanes in the wake of Sunday’s deadly plane crash in Ethiopia.

On Sunday, Ethiopian Airlines flight 302 crashed six minutes after takeoff en route from Addis Ababa to Nairobi, Kenya, killing all 157 people on board. The ill-fated jet was the same model as the plane that crashed in Indonesia five months ago, killing 189 people.

000000
Popular comments
edover3, Russia does not yet have a jet that can replace a 737 Max, although Russia and China are jointly developing such an aircraft. Further many Boeing aircraft were purchased before diplomatic relations took a nose dive - pun intended. And, why would Airbus be any better? It is not as if Airbus has such a perfect record either.