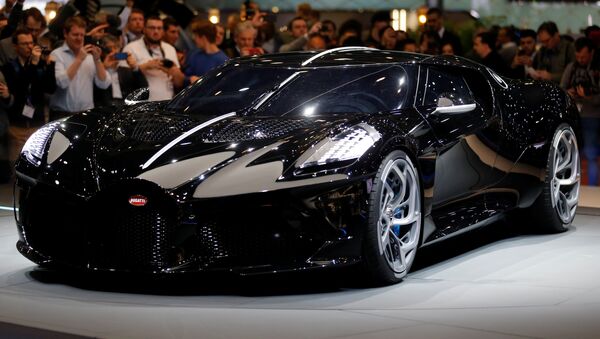 Known as La Voiture Noir (The Black Car), the supercar was made to commemorate Bugatti's 110th anniversary and features an engine 20 times more powerful than a Ford Fiesta.

French automaker Bugatti has made its first sale of the world's most expensive car at the Geneva International Motor Show 2019, with a hefty price tag of at least £9.5m ($11m) before taxes, overtaking the Rolls-Royce Sweptail by £500,000-£1.5m.

The supercar features a matte-black carbon fibre body and 1,500 horsepower, 16-cylinder engine, boasting similar specs to the Bugatti Chiron, which reaches 62mpg in 2.4 seconds and reaches a top speed of 261mph.

The person believed to have bought the pricey vehicle is Ferdinand Piech, the grandson of Porsche's founder. Mr. Piech was the former CEO of Volkswagen, Bugatti's parent company.

Bugatti claims that the purchaser was "an enthusiast of the brand", and La Voiture Noire pays homage to the Type 57 SC Atlantic, according to Bugatti. Ralph Lauren was the owner of the last Atlantic made, with only four of its kind produced between 1936 and 1938.

Speaking on the exhibition, Bugatti president Stephan Winkelmann said that it had seen "a worthy celebration of our 110th anniversary, with the world premiere of 'La Voiture Noire'1, the world premiere of the Chiron2 Sport '110 ans Bugatti' and now the official announcement of our new capsule collection".

"In the Audes Group we have found the right partner for this new collection," Mr. Winkelmann said shortly after signing an official contract with Audes Group CEO and founder Alessandro Bozzoli.