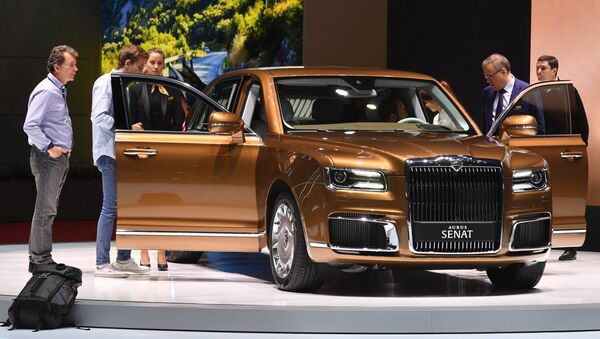 The Russian foray into the luxury automotive market, unexpectedly kicked off at the presidential inauguration last May, has proven to be a runaway hit, with civilian limo and sedan variants of the presidential Aurus Senat limousine selling out two years in advance, despite a hefty price tag starting at 10 million rubles (about $151,000 US).

Visitors of the Geneva Motor Show, one of the largest and most important annual events of the automotive world, got a first-hand glimpse of Russia's new high-end Aurus-brand vehicles, which made their European debut at the event.

Aurus' display, which included a traditional, armoured limousine version of the Aurus Senat, was flanked by an Aurus sedan, as well as a full-scale mockup of the vehicle's undercarriage and 4.4-litre turbocharged V8 engine.

The armoured version of the 🇷🇺#Russian presidential limousine #Aurus was presented in Geneva. pic.twitter.com/61Ci17iCeW

Speaking to Sputnik, Hilgert confirmed that the first Russian non-state customers should receive their Aurus sedans and limousines in the third or fourth quarter of this year, with deliveries to state organisations expected to wrap up in the near future. According to Hilgert, the company hopes to begin the first deliveries of Aurus sedans and limos to European customers by late 2020.

Denis Manturov, Russia's minister of industry and trade, who has taken part in the Aurus' development since its early stages, said that today, with the brand's obvious prospects for sales abroad, priorities include attracting trade partners and bringing the vehicles to international markets.

Speaking to Sputnik, Manturov said that mass production of Aurus brand vehicles is expected to kick off in 2020, with production expected to climb gradually to reach about 5,000 vehicles a year in 7-8 years' time.

The Aurus-brand family of luxury vehicles was officially unveiled at Russian President Vladimir Putin's inauguration ceremony last May. Along with the 'Senat' limousines and sedans, the series includes an 'Arsenal' minivan, with work underway on a 'Kommendant' SUV and a presidential motorcade motorcycle, the latter created under the Izh brand.

Visitors of the Geneva Motor Show will have a chance to see unique vehicles from the world's leading manufacturers until March 17.