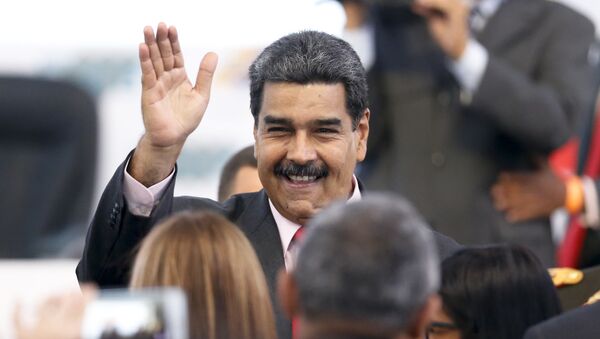 © AP Photo / Ariana Cubillos
Subscribe
International
India
Africa
Venezuelan President Nicolas Maduro stated on 23 February that he is continuing to govern the country despite the tense situation on the Latin American country's borders.

During demonstrations in support of the Bolivarian Revolution that were held on 23 February, Nicolas Maduro reportedly danced salsa with his wife Cilia Flores in order to raise the spirit of his supporters.

Their dance was captured on video and broadcast by state television.

The footage comes as the Venezuelan opposition, led by self-proclaimed President Juan Guaido, was trying to ensure the delivery of US-sponsored humanitarian aid to the country via neighbouring Brazil and Colombia on 23 February, something which resulted in numerous clashes.

Amid the tense situation with the delivery of American aid, Nicolas Maduro broke off diplomatic and political relations with Colombia, while the Venezuelan Foreign Ministry stated that Colombian diplomats had to leave the country within 24 hours.

Maduro has strictly opposed the deliveries, slamming them as a ploy to topple his government, having previously closed the land border with Brazil and the sea border with the Lesser Antilles, subsequently also closing several border crossings with Colombia.