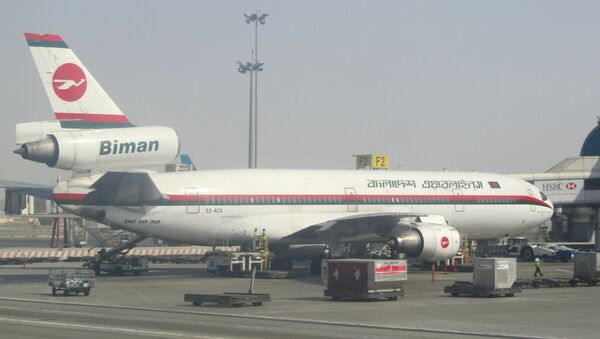 CC BY 2.0 / Kurush Pawar /
Subscribe
The suspected hijacker, identified as Mahadi, a 25-26 man, has been shot and died shortly after the arrest, army spokesman Major General Motiur Rahman stated. As he explained, the man refused to surrender and was aggressive. The law enforcement found a pistol from him, the spokesman added.

Earlier,  the Daily Star reported, citing Civil Aviation Secretary Mohibul Haque that a person suspected of attempting to hijack a Biman Bangladesh Airlines plane has been detained and placed in custody.

According to AFP, citing a passenger in Chittagong, the airport was closed off by army, navy and special police forces. The media specified the attacker fired twice just ten minutes after the plane took off Dhaka. At the same time, Bangladeshi newspaper Prothom Alo reported, citing a crew member, that the man threatened to blow up the plane and had a bomb-like object on him.

The Daily Start informed, citing eyewitnesses from the plane, there was a shootout on the board of the aircraft. Local media outlets have announced that one crew member was shot during the alleged attack. However, no official statements from the authorities have been made.

#BimanBangladesh Airlines' flight #BG147 has made an emergency landing in #Chittagong following a hijacking attempt.
Hope everyone safe onboard. pic.twitter.com/ZJODs1Lzwk

A Biman Bangladesh Airlines plane has made an emergency landing in Chittagong while en route to Dubai from Dhaka. Local media reported that the landing had been caused by a hijacking attempt.