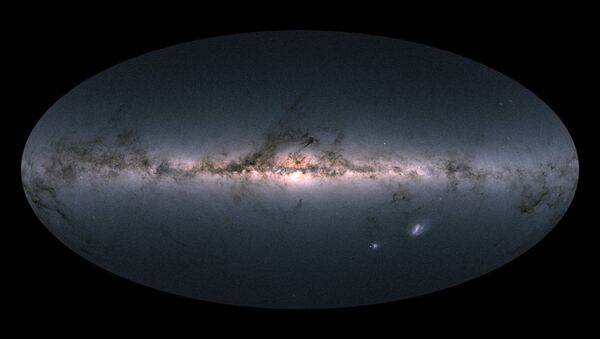 Formed in the galaxy one billion years ago, a cluster of stars has been revealed to have whipped long circles around the edge of the Milky Way and to have stretched into a long stellar stream, passing just 330 light-years away from the Earth.

Astronomers had seen these stars before without realizing that they were a part of a group. The river, which is 1,300 light-years long and 160 light-years wide, winds through the Milky Way's vast, dense star field, Live Science reported. Only through the use of 3D mapping data from Gaia, a European Space Agency spacecraft, was it possible to see that the stars in the stream moved together at roughly the same speed and in the same direction.

"Identifying nearby disk streams is like looking for the proverbial needle in a haystack. Astronomers have been looking at, and through, this new stream for a long time, as it covers most of the night sky, but only now realize it is there, and it is huge, and shockingly close to the sun," João Alves, an astronomer at the University of Vienna and second author of the paper, said in a statement.

Our Milky Way to Face Double-KO Punch in Two Galactic Collisions - Astronomers
These stellar systems are usually difficult to study because they're well-camouflaged amidst surrounding stars. Yet such streams are usually much farther away.

"Finding things close to home is very useful, it means they are not too faint nor too blurred for further detailed exploration, [an] astronomer's dream," Alves said.

Scientists suggest that studying such star clusters could reveal how galaxies are formed. But in a big, heavy galaxy like the Milky Way, those clusters usually end up shredded, with gravity pulling individual stars in different directions, and only big and heavy enough streams are able to remain intact. Lucky for astronomers, our Milky Way has at least one of these streams; however studying the initial Gala data could help to reveal more of them.