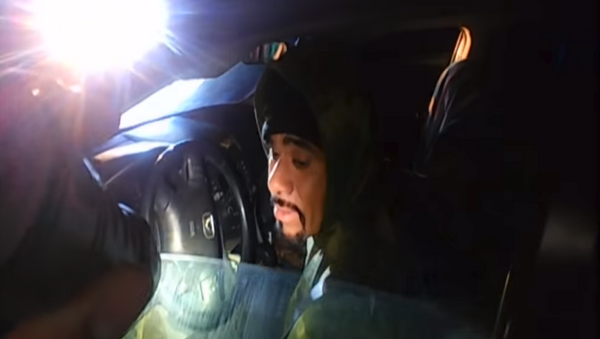 WATCH: US Man Tackled For ‘Stealing' His Own Car to Settle Suit Against Police
Local media reports indicate that the series of events unfolded on February 17 at roughly 11 p.m. local time, when Napa County Sheriff's Deputy Riley Jarecki approached Javier Hernandez Morales after spotting him parked off the side of the road.

The released bodycam footage shows Jarecki first speaking to Morales from the car's front passenger side, asking to conduct a quick vehicle check. She later moves toward the driver side after Morales agrees to the search.

The traffic check quickly turns murderous once Morales, as he's rolling down his driver window, decides to pull his.22 caliber revolver on the deputy. Moments after asking "what's up" in Spanish, Morales fires at least one shot in Jarecki's direction.

Morales later died at the scene, and Jarecki did not sustain any physical injuries, according to police.

A search of Morales' car later turned up a second firearm, a loaded.22 caliber rifle. Police determined that the revolver Morales discharged at Jarecki had previously been reported as stolen in the nearby city of Fremont.

It was also discovered that the red Honda Morales was driving was not registered in his name, though it had not been reported stolen.

Speaking at a news conference, Napa County Undersheriff Jon Crawford told reporters that the incident was a clear case of attempted murder by Morales, and that Jarecki acted in self defense.

"The loss of life is something that we always take very seriously, either by this agency or by any other law enforcement agency," Crawford said. "In this case, however, Hernandez Morales made the choice to attempt to murder deputy Jarecki, and she responded accordingly."

Additionally, Crawford explained at the conference that Jarecki was conducting a routine vehicle check, in which deputies search to see if occupants need assistance or to check if anything "nefarious" is taking place inside the vehicle.

Police revealed that Morales lived in Napa and was employed as a farm worker, and that he had a rap sheet that included weapons violations, an assault on a peace officer and a DUI.

It is still unclear why Morales opted to fire his weapon, although officials have indicated that he had a "few warrants" out for his arrest.

Jarecki is presently on administrative leave, which is department protocol for officer-involved shootings. The incident is being investigated by the Napa County Major Crimes Task Force, the San Francisco Chronicle reported.

000000
Popular comments
The America landscape is crime ridden. From both its streets to its capitals, America a Nation falling ever further in discourse.

2007harleydavidsonsg
21 February 2019, 23:35 GMT3
000000
One thing you cannot call an American copper is a "Peace Officer". Still a terrible thing to happen and I hope the police officer takes solace in that they had no other course of action they could take.