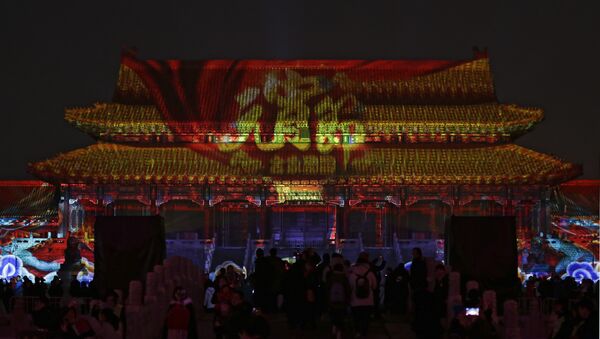 For the first time in 94 years, the largest, best-preserved brick-and-wood palace in the world opened at night on Tuesday.

To celebrate the festival on the 15th day of the first month in the Chinese Lunar calendar, the Forbidden City was lit up with giant red lanterns and projections of ancient paintings in a Chinese New Year-themed exhibition.

The grand palace cluster offered an experience that echoed down the centuries like a new year's celebration in the Qing Dynasty (1644-1911) imperial court of old, in concert with the happiness of reunion of the traditional Chinese festival.

Masterpieces such as Along the River During the Qingming Festival were projected on the tile roofs, giving visitors a feeling like walking through time. They also enjoyed a pipa, or Chinese lute, performance by the China National Traditional Orchestra.

Russia
Chinese New Year Festivities in Russia Dissolve Cultural Distance
The design team smartly integrated high technology lighting with the principles of cultural relic preservation. They formulated multiple schemata in an attempt to minimize the damage from illumination to the ancient buildings.

All tickets sold out, but the museum made sure to invite pioneers and representatives of industries including couriers, sanitation workers, firefighters, People's Liberation Army soldiers and armed police to see the lights and enjoy the scenery. Many who couldn't get tickets huddled outside the ruddy royal walls.

"It makes me excited to see the Forbidden City at night for the first time," said Xue Ying, a volunteer security coordinator invited in for the view.

"It's totally different from its view in the daytime. The Palace Museum is solemn in the daytime, but quite dreamy at night that makes me love it more."

China Sees Robust, Upgraded Consumption During Spring Festival Holiday
The festival attracted thousands to stay up overnight to grab a chance at sampling the interior night view of the mysterious palace.

The lantern festival show was reported by Chinese media as part of the Palace Museum's ongoing efforts to explore more innovative means of connecting with the wider public and the illuminations lent a diverse charm and a new face to old relics.