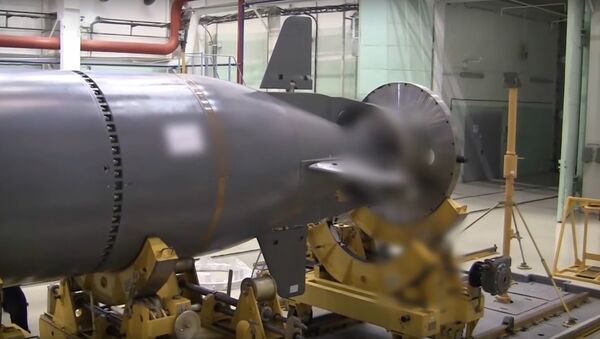 MOSCOW (Sputnik) - Tests of Russia's Poseidon nuclear-powered underwater drone were for the first time shown on Wednesday by the Rossiya 24 TV channel.

The clip, which lasts a few seconds, shows the Poseidon moving out of a container simulating the corresponding compartment of the drone carrier submarine.

"There was a full cycle of bench tests, including tests of a unique nuclear power unit, and then comprehensive marine field tests… All this allows to start a full final stage soon, i.e. tests of the drone together with its carrier," Khmyrov told reporters.

According to President Vladimir Putin, Russia's Poseidon underwater vehicles are capable of travelling in great depths and at intercontinental range at speeds several times greater than most submarines and modern torpedoes can achieve.

According to Putin, such drones can be equipped with both conventional and nuclear weapons, which will allow them to hit a wide range of targets, including aircraft carrier groups, coastal fortifications and infrastructure.