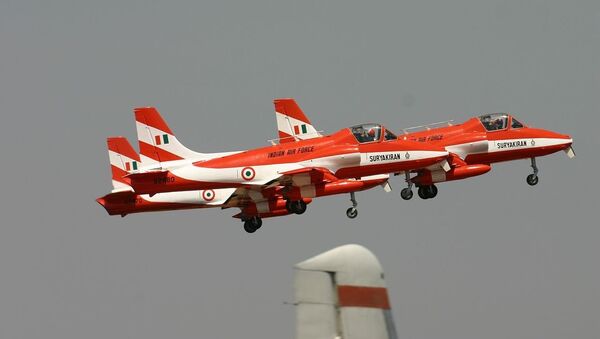 According to reports, the two aircraft collided mid-air during a rehearsal. The Indian pilots were preparing for the Air India Show.

The ANI news agency published a video of the crash scene with a smoke plume rising from the ground.

One of the pilots is suspected to be dead as per the State Police while two others are injured.

Earlier it was reported that tThe three pilots of the two jets managed to eject safely, according to reports.

"One civilian hurt. All pilots ejected, the debris has fallen near ISRO layout, Yelahanka new town area. One of the pilot is suspected to be dead and two of them are injured," Bengaluru Police told local media.

​Aero India 2019 is one of the largest international aviation exhibitions in the world; it has run every two years, starting in 1996. In 2017, 447 companies (234 Indian companies and 213 foreign companies from 22 countries) took part in Aero India.

#AeroIndia2019
The crash has sent shock waves not only among pilots but also people who were keen to purchase tickets only to watch their favourite #SuryaKiran men in red make their royal come back after three misses. pic.twitter.com/URI65bPMjU

​The Surya Kiran Aerobatic Team(SKAT) was raised in 1996 with Kiran MK-II aircraft. The Team for the first time carried out a 09 aircraft formation display on 15 August 1998.

The SKAT with nine-aircraft formation has performed numerous demonstrations worldwide and is one amongst the renowned public display aerobatic teams.

The aerobatic team of IAF has been resurrected with Hawk MK-132 aircraft replacing the Kiran aircraft.