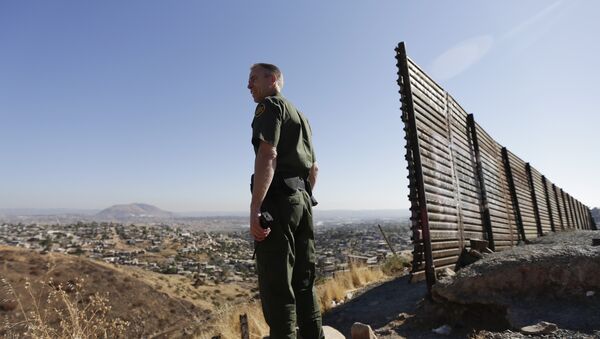 © AP Photo / Gregory Bull
Subscribe
International
India
Africa
On 15 February, the US government may enter another round of partial shutdown over funding for the border wall project - the idea backed by Trump’s supporters, including border patrol agents. According to the president, whether the government stays open is “up to Democrats.”

Dozens of supporters of US President Donald Trump have gathered at a section of the US-Mexico border in New Mexico to form a "human wall" in a display of support for the president and his border wall project, The Hill reported Monday.

The supporters, wearing Trump's trademark MAGA hats, linked hands and waved American flags and handmade signs, calling for construction of the wall and a crackdown on illegal immigration, human trafficking, drug smuggling and the re-entry of deported criminals.

The demonstration took place at Sunland Park, New Mexico, where there is a gap in the current physical barrier between the US and Mexico.

​This place also borders El Paso, Texas, where Trump is holding his first campaign rally of the 2020 election cycle Monday.

The "human wall" comes as a response to a tweet by Trump describing the "tremendous amount of people" coming from Latin American countries through Mexico aiming to flood US' southern border.

"We have sent additional military. We will build a Human Wall if necessary. If we had a real Wall, this would be a non-event!" the president tweeted 5 February.

Tremendous numbers of people are coming up through Mexico in the hopes of flooding our Southern Border. We have sent additional military. We will build a Human Wall if necessary. If we had a real Wall, this would be a non-event!

​The US Congress is still in discussions regarding funding Trump's border wall project. The Democrats' resistance to the project and Trump's insistence on its funding caused the US government to go into the longest partial shutdown in the country's history. The government was temporarily reopened for three weeks in order to provide funding to government employees, but that deal expires on 15 February.