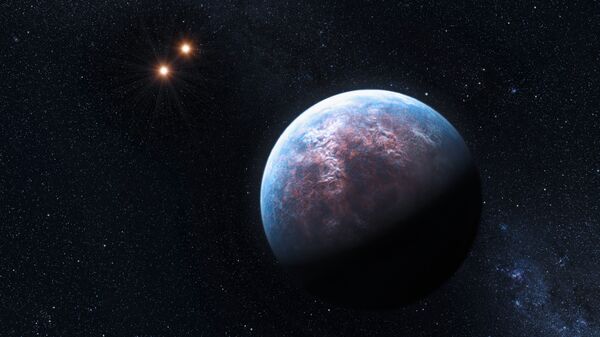 © Photo : ESO/L. Calcada
Subscribe
International
India
Africa
Recently discovered Kepler-107b and Kepler-107c might offer a unique insight into how worlds are formed, as these two exoplanets, while having almost identical radii of 1.5 and 1.6 Earth radii, have densities that are over twice as different.

A new study by scientists from Italy's National Institute for Astrophysics (INAF) and the University of Bristol examines exoplanets in the Kepler-107 system in order to try and understand how planets in the same system and with similar sizes can have such a wide range of densities. The scientists have been studying the exoplanetary system Kepler-107 through the Telescopio Nazionale Galileo in La Palma, Spain.

According to the study, the reason why two exoplanets could be so different in a very compact system of planets is that they were formed under very different conditions, or that something dramatic happened post-formation to alter their densities so drastically.

Science & Tech
NASA Satellite Discovers 'Cool' Neptune-Like Exoplanet
Kepler-107b and 107c have radii of 1.53 and 1.59 Earth radii, orbital periods of 3.18 and 4.9 days, but densities of 5.3 and 12.65 grams per cubic centimetre, respectively. It is even more strange that Kepler-107c is an outer planet – as in our solar system outer planets like Jupiter, Saturn, Uranus and Neptune have much lower densities as they are formed from cold ices and gases, while inner planets are formed out of materials that survived the Sun’s radiation, like silicates and iron.

"Giant impacts are thought to have had a fundamental role in shaping our current solar system," explained Bristol's Dr. Zoe Leinhardt, a computational astrophysicist and coauthor of the study's paper, in a press statement, cited by Popular Mechanics. "The Moon is most likely the result of such an impact, Mercury's high density may be also, and Pluto's large satellite Charon was likely captured after a giant impact but until now, we hadn't found any evidence of giant impacts occurring in planetary systems outside of our own.”

"If our hypothesis is correct, it would connect the general model we have for the formation of our solar system with a planetary system that is very different from our own," she added.

The origin of Kepler-107c could help with understanding the mysteries of our own Solar System – for example, it could provide an explanation of Mercury’s metallic core that covers around 85 percent of its body. The origin of this core is still unknown yet scientists suspect that a giant collision could have been responsible.