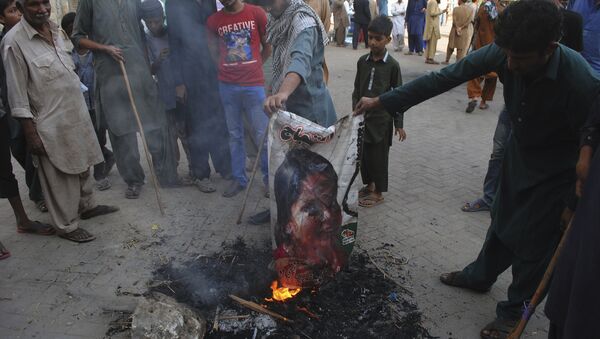 © AP Photo / Pervez Masih
Subscribe
International
India
Africa
After a review of her acquittal was rejected by the Pakistani courts at the end of January 2019, Miss Bibi was still being tracked down by fanatical religious mobs who had repeatedly threatened her life and her loved ones.

Asia Bibi, a Christian woman who languished for eight years on death row in Pakistan on charges of ‘blasphemy' has arrived in Canada with her husband, German media has quoted her lawyer as saying.

The lawyer, Saif-ul-Malook reportedly told the German language newspaper Frankfurter Allgemeine Zeitung that "she is united with her family." While the latest development to Miss Bibi's ordeal cannot be confirmed, it is known that her daughters fled to Canada recently. Moreover, in November 2018, Canadian Prime Minister Justin Trudeau said he was in talks with Pakistan about giving Miss Bibi asylum.

When asked by the German publication about when Bibi departed and under what arrangements, Mr Malook reportedly refused to give the details, citing security reasons.

Miss Bibi, a 47-year-old mother of four, was condemned to death by hanging in 2010 after allegedly insulting Islam in an argument with a group of neighbouring men who were offended by her taking a sip from their cup because she was not Muslim. In Pakistan, so-called blasphemy against Islam is illegal, and conviction under this law usually comes with the death sentence. However the supreme court — Pakistan's most senior — acquitted Bibi of the charges in October 2018, swiftly releasing her from jail.

After Bibi was released from prison, a tsunami of nationwide anger rolled across Pakistan, causing a three-day-long mass protest led by the radical Islamist group Tehreek-i-Labbaik Pakistan (TLP). The protests, which brought entire cities to a standstill, ended when the Islamabad government negotiated with the Islamist protestors, telling them it would not stand in the way of anyone filing a review petition against the court's decision to let Bibi off of the death sentence.

After a request was made for the supreme court to review Bibi's acquittal, it was feared that she may end up back on death row. However, on Tuesday January 29 2019 the court ruled to uphold her permanent release. Following that, Pakistan's information minister Fawad Chaudhry told the country's ‘Dawn' newspaper that, "Following the decision…Asia Bibi is a free woman and she can go anywhere she wants."