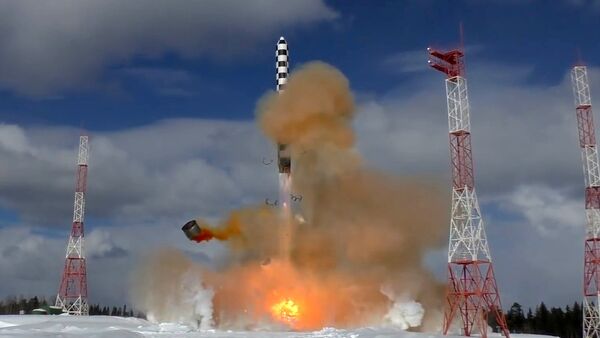 The glider system, capable of accelerating to up to 27 times the speed of sound, was unveiled by the Russian president last March as one of six new Russian weapons designed to preserve the global strategic balance.

Tactical Missiles Corporation JSC, the Korolyov-based armaments concern tasked with mass production of the new Avangard hypersonic glide vehicle, has patented a new method for fueling rockets, according to a press statement on the company's website.

Doing away with traditional stationary storage systems in favour of a new mobile system fueled from rail-based tanker cars, the new fueling system promises to independently prepare fuel, achiving the required temperature and saturation, ahead of the rocket fueling stage.

The company clarified that with several such mobile systems available, it will be possible to easily transfer them to whatever region of the country a launch is carried out at. Secondly, the system's components will be built using modern hardware components, eventually making it possible to fully automate the process of preparing the rocket propellant.

The patent is also touted as being safer than the existing method. "The new method makes it possible to reduce overflows and, as a result, hazardous operations," the press release states, citing company engineer Svyatoslav Lemeshev.

'Can't Afford to Wait': Defence Chief Unveils France's Hypersonic Arms Ambitions
Tactical Missiles Corporation JSC is the developer of the UR-100N, one of the intercontinental ballistic missiles to be fitted with the Avangard hypersonic glide vehicle payload delivery system. Unveiled last spring, Avangard gliders are carried into space by ICBMs, where they accelarate to incredible speeds before descending to Earth to hit their targets. Capable of traveling at speeds of up to Mach 27 and carrying out evasive manoeuvres in flight, the system is invulnerable to all existing and prospective air defence systems.

Initial development of the Avangard began in the mid-1980s as a response to Ronald Reagan's 'Star Wars' missile defence concept. The program, codenamed "Albatross," was approved in 1987, but abandoned in the early 1990s due to warming relations with Washington and, later, financial difficulties associated with the collapse of the Soviet Union. The Russian government decided to resume work on the program in the 2000s, after the US began to deploy a missile defence shield in Europe. Testing of the Avangard began in 2013. In a March 1, 2018 speech to officials, President Putin unveiled the weapon as one of half-a-dozen systems designed to guarantee a Russian response in the event of an enemy nuclear attack.