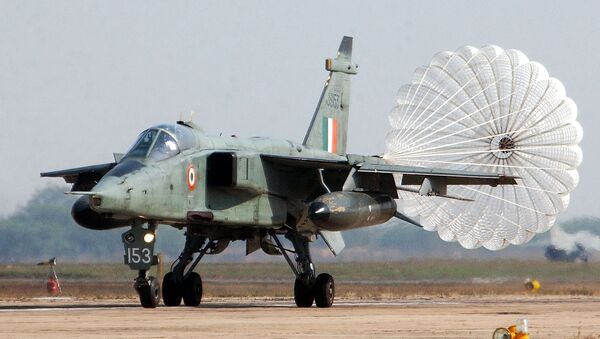 An Indian Air Force "Jaguar" fighter crashed in Kushinagar, Uttar Pradesh, in the north of India, the Times of India reports.

The jet was on a routine mission from Gorakhpur. The pilot manged to eject safely, according to reports.

"This morning, a Jaguar aircraft crashed while on a routine mission from Gorakhpur. The pilot ejected safely. A court of inquiry has been ordered to investigate the accident," the Indian Air Force said a statement.

Fighter Aircraft of @IAF_MCC crashed in Haitimpur, KushiNagar in #UP. #Pilot ejected safely with the help of #Parachute. Fighter crashed in Open Field. CoI order. pic.twitter.com/Q3Czb1yk8c

There is no information about the cause of the crash yet.

Uttar Pradesh: Visuals from Kushinagar where an Indian Air Force Jaguar fighter plane crashed today, the pilot managed to eject safely. A court of Inquiry has been ordered to investigate the accident. pic.twitter.com/fZtAtJcd3U

Video filmed at the scene of the crash shows flaming debris and a large crowd of eyewitnesses.

Authorities are investigating the accident.

Earlier, in September, an Indian Air Force MiG-27 fighter jet crashed during a routine flight near the city of Jodhpur in the country's northern state of Rajasthan; the pilot managed to eject safely.

The Jaguar is a twin-engine, ground attack aircraft which was designed and developed jointly by Breguet of France (now part of Dassault) and the UK-based British Aircraft Corporation (BAC) in the 1960's; India started using the planes in 1979.