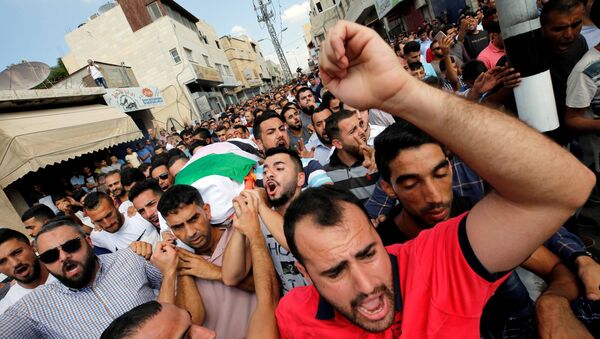 © REUTERS / Abed Omar Qusini
Subscribe
International
India
Africa
An Israeli teengaer was charged with manslaughter on Thursday by the state's prosecutors for his involvement in a stoning attack on a car in the occupied West Bank that ultimately led to the death of Aisha al-Rawbi, a 47-year-old Palestinian woman.

Other charges listed in the indictment include aggravated stone throwing at a moving vehicle and intentional sabotage of a vehicle, according to The Times of Israel, which reported that each charge qualified as being executed "in the context of a terrorist act." If convicted, the unidentified minor could face up to 20 years in prison.

Prior to Thursday's announcement, Israeli media reported on Wednesday that investigators had found DNA samples that were linked to the minor, who is a student at the Pri Haaretz seminary in the settlement of Rehelim.

The teen has repeatedly claimed that his DNA was found on the stone that hit Rawbi because he frequently hikes in the area. However, officials did not find his DNA elsewhere in the area. Israeli media reported that his alibi fell apart after authorities collected testimonies from the head of the Pri Haaretz seminary and his fellow classmates.

Citing the indictment, the Times reported that the teenager threw the stone "out of an ideological motive of racism and hostility toward Arabs everywhere."

Amir Bracha, the teen's lawyer, told reporters that "this indictment stands on weak footing and DNA, which we doubt will stand up to court scrutiny."

Bracha's statement added that the teenager's father believed his son was targeted by prosecutors because they were desperate to file charges over the attack. "We know that our son is innocent," he said.

The stoning attack took place in October 12, 2018, when Rawbi was traveling in a car with her husband, Yacoub, and their nine-year-old daughter. As the family drove along Route 60 near the city of Nablus, they came under attack, and Rawbi was struck on the head by a 4.4-pound stone as she sat in the passenger seat.

Images shared on social media of the aftermath show pieces of a blood-stained stone where Rawbi had been sitting. Rawbi was pronounced dead shortly after her husband sought medical help at a nearby clinic.

"The Israeli police and intelligence both know who hit us leading to my wife's death, but they charged one person only," Yacoub told AFP after the announcement of the charges. "When they hit our car with stones [there] were more than four people."

"I want all those who killed my wife to be tried in an international court," he said, stressing his lack of faith in the Israeli justice system.

The teenager was initially arrested by Israeli officials on December 30, 2018. Four other suspects, who were likewise students at Pri Haaretz, were also arrested; however, they were later released in early January after prosecutors failed to obtain sufficient evidence against them. The charged minor is reportedly still in custody, and prosecutors are requesting that he remain so until proceedings are concluded.