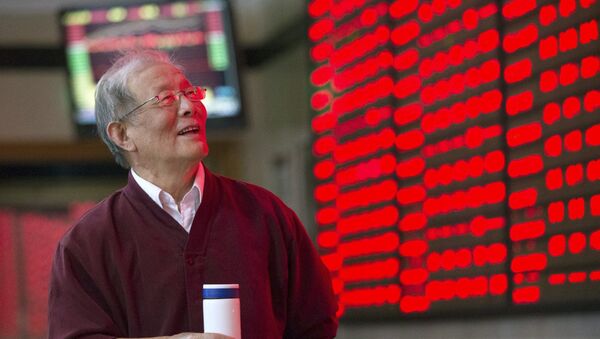 © China Daily
Subscribe
International
India
Africa
China's Finance Ministry says a planned increase in budget spending this year will focus on supporting small businesses and households, as it seeks to boost domestic consumption and business activity in the face of structural inefficiency and slowing growth.

Kristian Rouz — The Chinese government has confirmed it will increase budget spending this year to provide a boost to the nation's slowing economy. Officials say the upcoming fiscal stimulus will focus on tax reductions, particularly, for small businesses.

China’s GDP Growth in 2018 Drops to Lowest Level Since 1990
According to a statement from the Chinese Finance Ministry Wednesday, the central government in Beijing will lower taxes and fees for a broad range of taxpayers, both individuals, and businesses. Additionally, China plans to decrease the fees levied by its social security system, which, officials believe, will provide additional support to business activity.

Experts say the government will focus on fiscal policy as its main tool to support economic growth this year, while the People's Bank of China's (PBOC) monetary policies will be subject to more modest adjustment.

"Fiscal policy will be the front line of defence against mounting macroeconomic headwinds in 2019", Zhu Haibin, lead China economist at JP Morgan, said.

The Finance Ministry's announcement comes after the government released its full fiscal report for the past year. According to the new batch of data, China has already had some fiscal stimulus in place, as its fiscal spending rose 8.7 percent in 2018 to some $3.3 trillion, while budget revenues only rose 6.2 percent to an equivalent of roughly $2.70 trillion.

China's Top Economic Planner Details Stimulus to Boost GDP
Higher budget spending last year focused primarily on infrastructure projects and support for China's large state-owned enterprises (SOEs). Some of these measures were criticised by the US — as part of its Trade Representative's probes into the China trade — as "unfair subsidising".

This year, China is poised to change its approach to fiscal stimulus, not least due Beijing trying to play it safe amid the ongoing trade talks with the US. A focus on tax reductions for smaller firms, rather than direct cash injections from the budget into its manufacturing giants, would likely not meet the definition of uncompetitive subsidising, some experts say.

"The government has grasped the problem and is adopting a different style of fiscal stimulus: tax cuts, for both households and corporations", JP Morgan's Zhu said.

According to preliminary estimates, the scale of Chinese tax cuts could reach as much as 2 trillion renminbi ($294.68 billion), or 2 percent of its GDP, this year.

Meanwhile, economists also point out that Beijing's plans to boost spending will likely drive budget deficits. Experts believe China's yearly deficit ratio could exceed 3 percent of GDP. This comes as the government in Beijing reduced its deficit target to 2.6 percent last year from the previous target of 3 percent.

China’s GDP Growth Rate to Stay Strong, But Slightly Weaken This Year - IMF
This might suggest, unless China sees a robust expansion in its tax base and revenues in 2019, Beijing will have to amass additional debt, which could put the nation's fiscal sustainability at risk. Some experts say China's total debt-to-GDP ratio has stood at roughly 300 percent since at least 2015, which might put into question Beijing's ambitious spending plans.

However, if China implements its fiscal stimulus after reaching a trade deal with the US, Beijing has much less to worry about in terms of debt and deficits. Economists believe a Sino-American trade deal would significantly boost the volumes of bilateral exchange in goods, services, and capital, meaning China's fiscal revenues will indeed experience significant growth.

This could allow China to even meet its new 2.6-percent deficit target this year, but so far there is too little clarity regarding the negotiations and their likely outcome. In light of this, experts warn against excessive optimism about the Chinese market although some say now is the right time to invest.

Int'l Oil Prices Hit 2019 High Amid Strong Chinese Demand
Meanwhile, the central government in Beijing is gradually continuing to refinance the debts of provincial governments, which are seen as one of the biggest threats to China's macroeconomic stability. China's State Council has already approved this year's quota for new local government borrowing, setting it at 1.3 trillion renminbi — well below the estimated size of the upcoming fiscal stimulus package.

All these developments might suggest China is not only planning to inject liquidity into the economy, but is also gradually advancing its structural reform — in line with one of the key US demands in the ongoing talks.