Manny Pacquiao Turns Back the Clock, Beats a Rival 11 Years His Junior 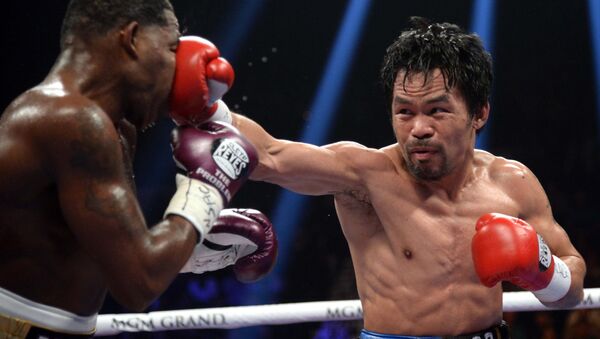 Filipino boxing great Emmanuel "Manny" Pacquiao, who turned 40 a month ago, has focused on his political career and is currently serving as a senator in the Philippines. However, in the most recent fight he outpaced and outpunched a younger Broner - and has no plans to stop yet.

Manny Pacquiao, who has picked up twelve world titles across eight weight classes, has proven that he still has what it takes despite a two-year hiatus from fighting on US soil.

This win, which saw Pacquiao retain his WBA world welterweight title, became the 61st in his 24-year career. Now, he wants to take on another boxing legend.

In a post-fight interview, the boxer-turned-politician called out Floyd "Money" Mayweather, the legendary American boxer who already beat him three years ago. "Tell him to come back to the ring, and we will fight", Pacquiao said. "I am willing to fight again if he is willing to come back to boxing."

Mayweather, who retired from professional boxing in 2015 months after defeating Pacquiao, has not commented on the challenge yet.

Boxing fans, meanwhile, have been going wild on social media, praising the Filipino champ and mocking Broner for his post-bout comments that he "beat" Pacquiao and "controlled" the fight.

Broner: “I outboxed that boy

This is who Manny Pacquiao fought tonight 🤨 #Boxing pic.twitter.com/P7ZEjRLejv