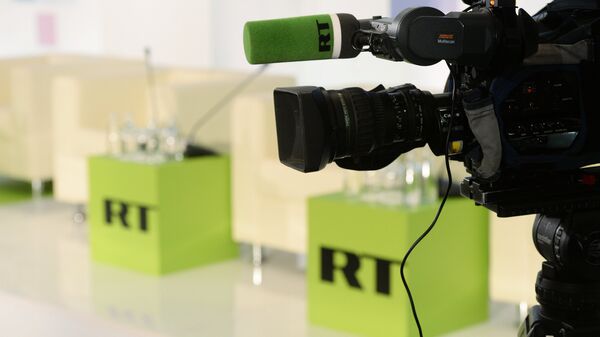 BERLIN (Sputnik) - The German Federation of Journalists urged local regulators on Friday not to issue a license for broadcasting to the RT Deutsch broadcaster.

"The German Federation of Journalists calls on regional regulators supervising media outlets' activity not to issue a broadcasting license for the RT Deutsch website to the RT channel… For us, RT is not an information communicator but a tool for Kremlin propaganda," the federation said in a statement.

The situation around Russian media in the West has become increasingly difficult in recent years. In November 2016, the European Parliament voted in favor of a resolution to counter alleged Russian anti-European Union propaganda. According to the document, media such as Sputnik and RT pose a threat to European unity, and thus extra European Commission funding is needed for counter-propaganda projects.

Russian President Vladimir Putin said that the resolution proved that Western democracy was failing, but expressed hope that common sense would prevail and Russian media outlets would be able to work abroad without restrictions.

A number of Western politicians, including those in the United Kingdom, the United States, and France, have accused Sputnik and RT of interfering in elections and spreading propaganda, without providing any evidence. Russian officials have repeatedly stressed that Moscow does not meddle in other countries' affairs and pointed out that the allegations of Russia tampering with votes in other countries had been unsubstantiated.