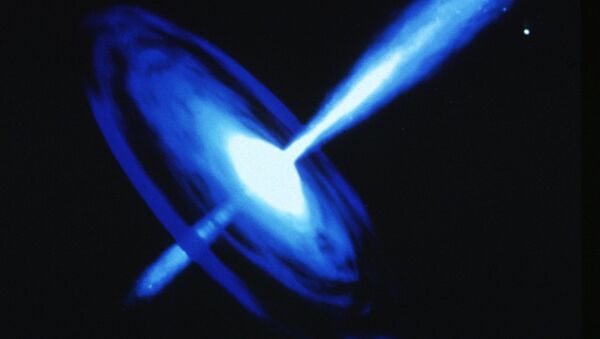 Astronomers and astrophysicists from around the world still aren't certain what to make of an unusually bright flash of light coming from a galaxy far, far away that was witnessed last June, coming up with two intriguing theories about what exactly the phenomenon entailed.

The event, captured on 16 June 2018 by the NASA-funded ATLAS-1 telescope in Hawaii and several other sources, is known to have originated in a star-forming galaxy in the Hercules constellation, some 200 million light-years away from Earth, meaning the event occurred while dinosaurs still roamed the earth.

Over three days, astronomers witnessed an explosion of light equivalent to at least ten supernovas before proceeding to fade over the next several months. The event was officially classified the AT2018cow, but was quickly nicknamed "the Cow" by astronomers. 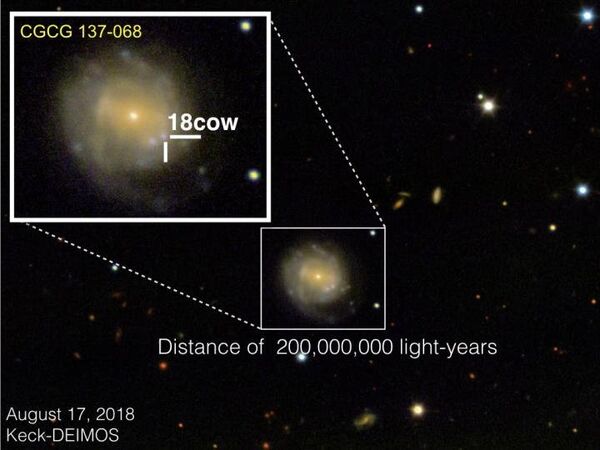 That's where the scientific consensus ends.

At a meeting of the American Astronmical Society in Seattle on Thursday, researchers of two opposing camps – one saying that 'the Cow' was a massive black hole shredding a passing star, and the other claiming it was a supernova event giving birth to a neutron star or black hole, met to discuss their theories.

Dr. Raffaella Margutti, an astrophysicist from Northwestern University and team leader of the 'supernova event' group, indicated that the importance of the event for science could not be overemphasised.

Interstellar for Real: Meet the Nuclear-Powered Spaceships of the Future
"Our team used high-energy X-ray data to show that the Cow has characteristics similar to a compact body like a black hole or neutron star consuming material. But based on what we saw in other wavelengths, we think this was a special case and that we may have observed – for the first time – the creation of a compact body in real time," Margutti explained.

In other words, if the team's theory is proven, it will be humanity's first-ever confirmed spotting of the creation of a black hole. Study coauthor Brian Grefenstette, an instrument scientist at Caltech, explained that "if we're seeing the birth of a compact object in real time, this could be the start of a new chapter in our understanding of stellar evolution."

The team studied data from several observatories, including NASA's NuSTAR, the European Space Agency's XMM-Newton and INTEGRAL satellites, and the National Science Foundation's Very Large Array, a US radio-based observatory.

The other team, led by Dr. Paul Kuin of University College London (UCL), believes that the Cow was a "tidal disruption event," and what scientists really witnessed was a massive black hole shredding a passing white dwarf star into a stream of gas with a powerful gravitational wave.

"We think a tidal disruption created the quick, really unusual burst of light at the beginning of the event and best explains Swift's multi-wavelength observations as it faded over the next few months," study co-author Dr. Amy Lien said, referring to data gleaned from NASA's space-based Neil Gehrels Swift Observatory.

Calculating that the 'offending' black hole was between 100,000 to one million times the mass of our Sun, the 'tidal disruption event' proponents believe the star that was shredded was a dwarf star only about the size of Earth.

Astronomers had a "cow" about this big blast https://t.co/lOEz49wwDd A dramatic stellar explosion, witnessed on June 16, 2018 (dubbed AT2018cow) is now one of the most intensely studied cosmic events in history pic.twitter.com/0nW0cmLpyK

Papers of both teams arguing their respective cases will appear in future editions of two scientific journals, with the "massive supernova" paper set to appear in the Astrophysical Journal, and the "tidal disruption event" paper coming soon to the Monthly Notices of the Royal Astronomical Society.

Our Milky Way to Face Double-KO Punch in Two Galactic Collisions - Astronomers
While touting the "supernova" theory for its use of data from multiple observatories, Dr. Grefenstette admitted that deciphering the mystery of what exactly happened a long time ago in the galaxy far, far away won't be easy.

"We looked at this object with many different observatories, and of course the more windows you open onto an object, the more you can learn about it. But, as we're seeing with the Cow, that doesn't mean the solution will be simple," he concluded.