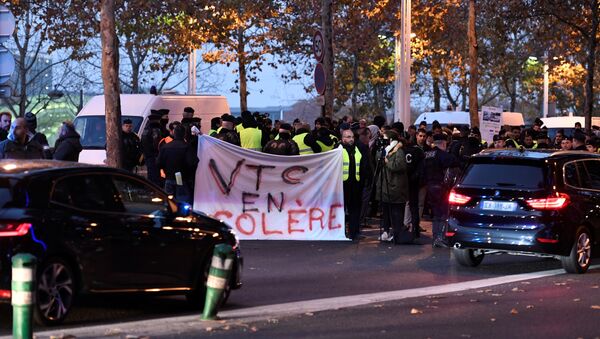 About a hundred drivers in Paris, registered with the service VTC (tourist transport with a driver, similar to Uber), are trying to block the ring road, according to Le Point.

According to the media, the drivers are carrying out 'operation escargot', the main idea of which is to occupy all lanes of the road and move at a minimal speed.

However, as the participants themselves write on Twitter, they left one of the lanes free for special transport passage.

French Gov't 'Only One Responsible, Guilty' for Yellow Vests Rallies - Le Pen
The drivers started their demonstration at 07:00 a.m. local time (06: a.m. GMT), partially blocking traffic on the ring road near the Paris Congress Palace, which is located near the Bois de Boulogne in the north-west of the capital.

As planned by the organisers, taxi drivers should make their way to the Roissy-Charles de Gaulle airport, which is located in the north-east of Paris.

According to Le Point, the drivers are demanding the introduction of a minimum tariff. The protesters' demands also include a partial exemption of the so-called tax on energy consumption, which determines the price of fuel.