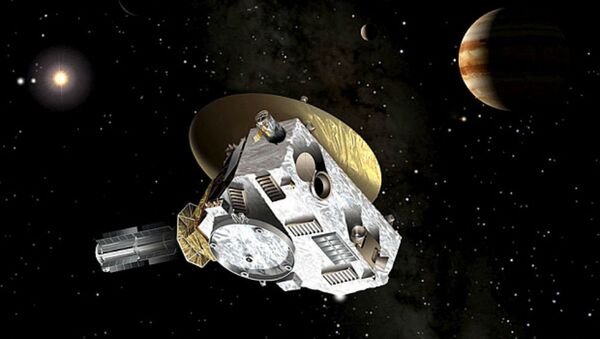 NASA has released an image of a space object at the very edge of our solar system, some 6 billion kilometres away. The New Horizons spacecraft flew past Ultima Thule, an object in the Kuiper Belt, in the early hours of New Year’s Day.

Sputnik: How excited are you about the New Horizon's mission and its flyby near Ultima Thule? What exactly do you find most fascinating about it?

Mohamed Ramy El Maarr: It's been a really thrilling ride, so much excitement among all of us, the scientists, among people in general all around the world.

WATCH: NASA’s Osiris-Rex Probe Takes Flyby Video of Asteroid Bennu
Sputnik: Experts say that studying Ultima Thule is a kind of a glimpse into how the solar system originated, but how exactly do we learn about it?

Mohamed Ramy El Maarr: So the New Horizons mission has a suite of cameras, it has also spectrometers where we can measure the infrared reflectance and from there we can get a good idea of the composition of the surface materials. That will give us an idea, for instance, if we could identify different ices, also the cameras will give us a glimpse of the topography and the geology of these bodies, that gives us as well information about what sort of materials are comprising Ultima Thule and that will give us an idea about the initial conditions of when the Solar System formed.

Sputnik: It is said that it will take about 20 months for all the data currently trapped on the probe to be sent back to Earth. What is the value of these data for science and astronomy?

Mohamed Ramy El Maarr: Yes, it's going to be a long wait and that of course has to do with the limited power of the transmitting antenna on New Horizons and we also have to factor in the very large distances. So what the science team has done is go through the data set that we've collected for Ultima Thule and we made scientific prioritisation of that data, so that we get what we deem is the most important data to meet the most primary requirements of the mission and then we go down that list. So while we've already received the first lower resolution images and some basic spectrum analysis that would give us at least an idea of what the shape of Ultima Thule and the geology looks like, around February, or maybe early March, we expect to get the higher resolution images. This will really give us spectacular views of Ultima Thule as well as detailed information about the composition, which can also come at near this time or may be a little bit later.

Sputnik: What's next for the New Horizons probe? Is there some kind of a timeline like milestones of certain specific target missions for the probe to achieve?

Mohamed Ramy El Maarr: Yes, certainly, so far the New Horizons mission, it's kind of different for from other missions where you might be if you're relying, for instance, on solar energy so if the spacecraft is at a zone where it cannot get any more energy we tried to just finish the mission off like we did with Rosetta, for instance, but in the case of New Horizons it's powered by nuclear fuel and that gives us actually quite good flexibility with it.

So the New Horizons mission, despite being very far, it still has enough energy maybe to go for 10 or 20 more years, so what the New Horizons mission team is thinking right now, first of all, is getting all the data for Ultima Thule and generating the best science possible out of this, and then we will think about the next study for Ultima Thule, so the fuel on the spacecraft should, in theory, be enough for one more flyby of another object. So we will apply to NASA for additional funding and support and we are quite optimistic that we can do this since no other spacecraft other than New Horizons can explore what New Horizons is doing now, and we will then first of all look for a suitable target, just like we did with Ultima Thule, look at a target that would be suitable and would be reachable by the New Horizons spacecraft and that hopefully could happen somewhere around maybe 2025-2026 something of that time frame.