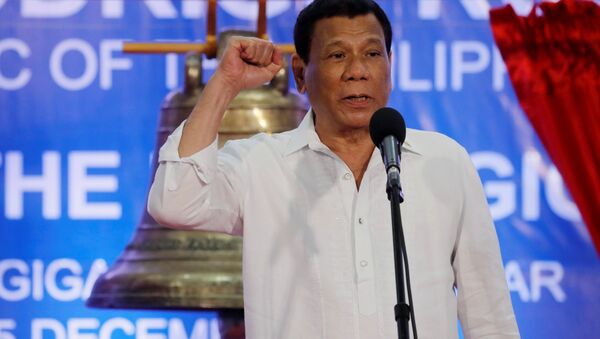 © REUTERS / Erik De Castro
Subscribe
The president branded some human rights activists "enemies of the government", and argued that they should "also talk about the innocent people who were killed" by drug addicts and cartels.

Philippine President Rodrigo Duterte has once again found himself in the limelight after making yet another trademark colourful comment, which he delivered while making an address in Masbate.

In his speech, Duterte complained about human rights activists who allegedly worry more about the fate of the suspects killed in the war on drugs than the victims of said suspects, according to Coconuts Manila.

"You human rights [activists], f*ck you. One drug addict died and you keep on whining about it everywhere," he said in a mix of Filipino and English, as quoted by the media outlet. "You don’t know how many Filipinos have been victimised [by that person]. We’re from different worlds. You’re crying [with your] bleeding hearts. ‘He died.’ So? How many people did that person kill?"

Duterte Slammed as 'Dictator' for Saying Auditors Should Be Kidnapped, Tortured
He also branded "those human rights activists" as "enemies of the government", and argued that they should "also talk about the innocent people who were killed" by drug addicts.

Moreover, Duterte addressed the rumours about him being allegedly ill, while simultaneously delivering a verbal jab to his political opponents.

Commenting on the claims made by some of "blood oozing out" from his anus, the president pretended to check the condition of his rectum by touching it, eliciting laughs from the audience.

"Can you see, it’s kinda wet. Is it true? [But] my faeces is all yellow. You Yellows — the public doesn’t like you at all. You’re already coming out of my anus but you still keep whining," he said, with the "Yellows" he mentioned being a reference to members of the Liberal Party whose official colour is yellow, as the media outlet points out.

Later, however, the president said he hopes his "strong words" and jokes didn’t offend anyone, claiming that he makes "rude comments" and pursues "the limits of civility" on purpose because "people have been rude" to him since his presidential campaign.

READ MORE: ‘I Was Touching’: Manila’s Duterte Boasts of Own Sexual Abuse Against Women

Elected on a promise to end drug-related crime in the country in 2016, President Duterte has become best known for his popular but controversial anti-drug war, which has led to the extrajudicial killing of thousands of suspected drug dealers in police raids. Duterte has also been embroiled in a series of verbal conflicts with the Catholic Church, the International Criminal Court, and former US President Barack Obama, and is well known for making rude comments and using expletives.

000000
Popular comments
No worries, his incurable cancer will soon say the last F-word.