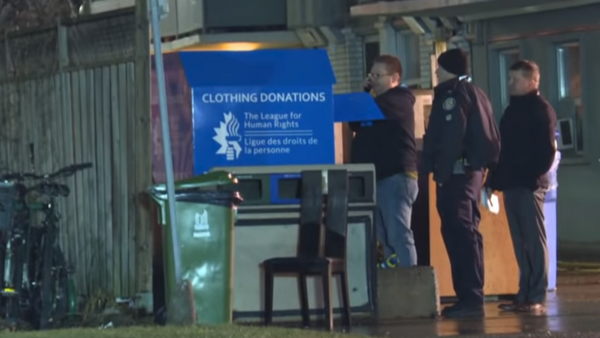 First responders were dispatched to Toronto's Bloorcourt Village area shortly before 2 a.m. local time after residents heard the woman yelling out for help. However, by the time officials arrived, the woman didn't have any vital signs, CBC News reported.

With half of Papineau's body sticking out of the box, and no way to access the bin, emergency crews were forced to cut open the structure's metal hinges in order to remove the body. Attempts to resuscitate Papineau were unsuccessful, and she was pronounced dead at the scene.

​Authorities are investigating the incident as a "death by misadventure," according to CTV news, which noted that officials don't believe the matter to be suspicious.

Patricia O' Connell, an executive director at Sistering, a Toronto-based charity for at-risk women who are homeless or precariously housed, told CBC that Papineau had previously spent time with the organization, adding that she was a "lovely human being."

Two other friends of Papineau told the outlet that she was likely trying to find some warm clothes inside the B'nai Brith Canada-owned donation box when she suddenly became trapped in the opening slot.

B'nai Brith Canada recently told Global News that upon hearing reports of the incident, officials with the Jewish advocacy group were "saddened at this terrible and tragic incident." The group is currently working with police on the investigation.

In response to the death, Toronto Mayor John Tory announced that he's directing staff to review the current state of the donation boxes, specifically whether they're the best way to handle the collection of donated clothing and their design, which is meant to prevent individuals from gaining access.

"I think if we look at these broad questions, focusing now first and foremost on safety, but then looking at the whole question of whether this system still works and whether these boxes are properly located, will give us a thorough examination of this," Tory told reporters earlier this week.

000000
Popular comments
At least she won't go to waste. ah man, I made myself feel bad, poor woman, let's hope se was doing good so there is a place in heaven for her.