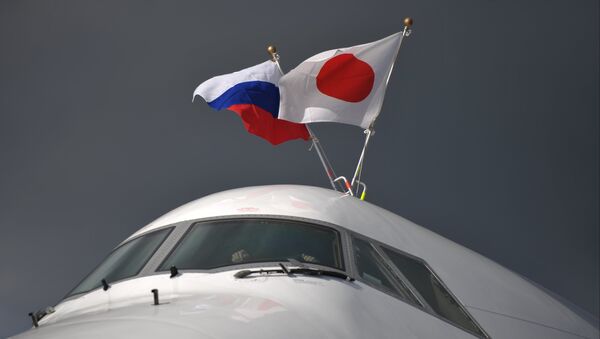 © Sputnik / Konstantin Salomatin
/
Go to the mediabank
Subscribe
International
India
Africa
TOKYO (Sputnik) - The Japanese government is working out a plan to offer Russia to abandon mutual claims for compensation related to Russia's four Kuril Islands, which are claimed and referred to as the "Northern Territories" by Tokyo, local media reported on Tuesday.

Tokyo is ready to offer Moscow to sign a corresponding document along with a peace treaty, the newspaper Yomiuri Shimbun reported, citing informed sources.

Asia
'A Gain for US': Abe Says Russia-Japan Peace Treaty to Benefit Regional Security
A 1956 Soviet-Japanese joint declaration already envisaged a waiver of mutual claims for compensation, but Tokyo believed that this provision applied only to the military period and covers compensation for damage caused by military actions. The Japanese government has not yet recognised that this situation applies to the situation around the islands of Kunashir, Iturup, Shikotan and Habomai, since they considered them "illegally occupied" by Russia. This led to the need to resettle Japanese citizens living there and to the loss of their ownership of land on the islands.

Now, the Japanese government is considering paying the islands' former residents compensation for the damage suffered at the treasury's expense, without demanding compensation from Russia, the newspaper said.

Additionally, the publication did not specify what the compensation claims from the Russian side could be.

World
Peace Treaty to Bring Japanese-Russian Ties to New Level – Japanese Ambassador
Japan and Russia have been struggling to conclude a permanent peace treaty for more than seven decades, with the negotiations making little progress over the years because of the ongoing dispute over the Kuril Islands. Russia insists that the islands were transferred to the Soviet Union after the end of the war legally and have been an integral part of Russia ever since.

In 1956, the two sides signed a Joint Declaration that provided for the restoration of bilateral relations after the war and stipulated that Japan and the Soviet Union would continue to make efforts toward signing a permanent peace treaty and settling the dispute over the islands.

On November 14,  Russian President Vladimir Putin and Japanese Prime Minister Shinzo Abe agreed to advance negotiations on a peace treaty based on the 1956 Soviet-Japanese joint declaration, the only document recognised by both countries. This is a serious concession on the part of Japan, since Tokyo's official position previously was to demand the return of the four islands prior to the conclusion of a peace treaty.