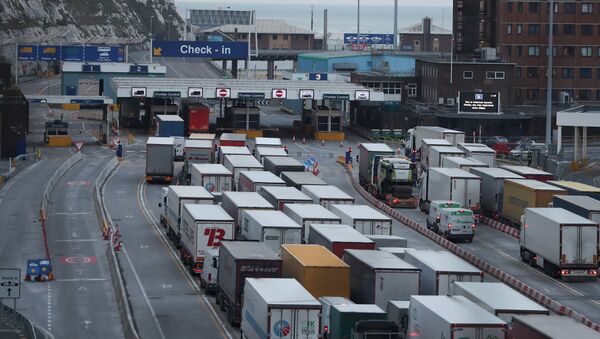 © AFP 2022 / Daniel Leal-Olivas
Subscribe
The likelihood of a no-deal Brexit has prompted the UK Department for Transport (DfT) to engage in contingency planning, according to The Guardian.

The Guardian reported, citing Kent county council officials and the UK Department for Transport (DfT) as saying that they are testing plans to deal with any turmoil caused by new border customs checks, using up to 150 lorries queuing up near Dover during rush hour.

"We do not want or expect a no-deal scenario and continue to work hard to deliver a deal with the EU. However, it is the duty of a responsible government to continue to prepare for all eventualities and contingencies, including a possible no deal. We will be testing part of Operation Brock to ensure that, if it needs to be implemented, the system is fully functional", a spokesman for the Transport Department said as quoted by the paper.

The tests will reportedly take place during the morning rush hour at 8 am, and again at 11 am, to "establish the safest optimum release rate of HGVs" from a nearby airfield to Dover along the A256.

READ MORE: 'No Deal' Brexit Ferry Firm Given US$18 Million by Government Owns No Ships

UK PM 'Hasn't Really Got Brexit in Her Bones' - Political Commentator
Traffic jams at the Channel ports created by the reintroduction of customs checks on goods have been one of the most usually cited negative impacts of a no-deal withdrawal from the EU at the end of March.

The United Kingdom is set to leave the European Union on the 29th of March. However, repeated deadlocks in the Brussels-London Brexit talks and the disagreements on the final Brexit deal between the UK government and the parliament have sparked speculations that the United Kingdom might withdraw from the bloc without a deal.