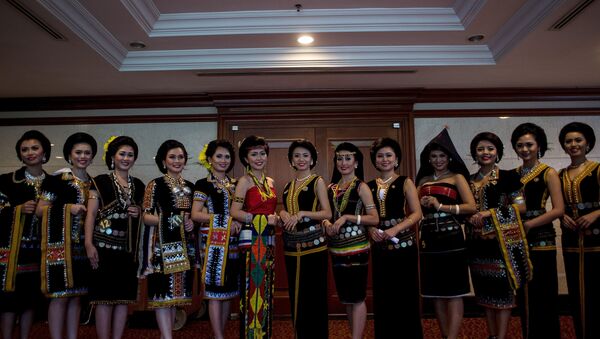 The president of the United Sabah Islamic Organisation also warned that any Muslim (except for children under the age of 12) “found guilty of taking part in a beauty contest or modelling” is liable to be fined and possibly even incarcerated.

Islamic government authorities in the Malaysian state of Sabah took a dim view of the recent proposal to allow Muslim women to participate in the annual Unduk Ngadau beauty pageant, which is held during the Kaamatan harvest festival, according to Malaysian newspaper The Daily Express.

"Unduk Ngadau has been organised for a long time and its concept and objectives are already known. Therefore, it is best it remains that way and not create controversy by suggesting the participation of Muslim women in this beauty pageant," Sairin said.

He also warned that under the existing Malaysian laws, any Muslim (except for children under the age of 12) “found guilty of taking part in a beauty contest or modelling” is liable to be fined up to RM1,000 (about $240) and faces incarceration for up to 3 months, the newspaper points out.

Sairin delivered his statement in response to Joanna Datuk Kitingan, chairwoman of the State Level Unduk Ngadau Kaamatan Organising Committee, vowing to continue to help Muslim women to get permission to partake in the pageant.

She claimed that it is important to practice inclusivity during the event as it helps "promote Kadazandusun culture."

Sairin, however, argued that while he strongly supports the chairwoman’s "efforts in promoting the culture and traditions of the Kadazandusun community through Unduk Ngadau", he also agrees with his colleagues in the Islamic community that Muslim women should not participate in the pageant.