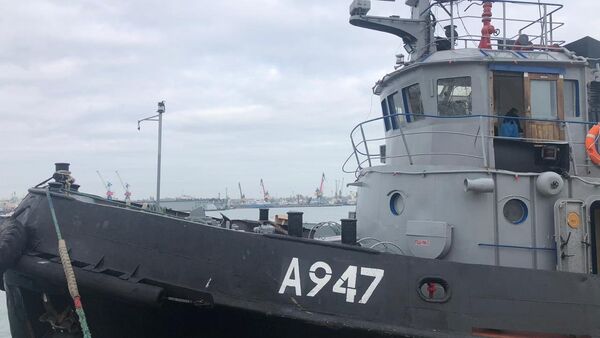 MOSCOW (Sputnik) - Kiev's provocation in the Kerch Strait, when Ukrainian Navy ships illegally crossed the Russian border and as a result were seized by Russian border guards, has been successful in terms of boosting Ukrainian President Petro Poroshenko's ratings ahead of next year's election, Russian President Vladimir Putin stated.

"Whether it was successful or not — in terms of raising the rating, it was probably successful, because Poroshenko's rating seems to have increased. He moved from the fifth position to the second or third, where, in my opinion, fluctuations amount to about 12 percent", Putin said at his annual press conference.

The president added that the provocation in the Kerch Strait was aimed at aggravating the situation ahead of the presidential election in Ukraine, and it seems to be harmful to Ukraine.

"It seems to me that provocations are always bad. This provocation was aimed at aggravation of the situation. Why do our Ukrainian partners need such a development of events? It is clear that there will be elections there and they need to be aggravated in order to raise the rating of one of the presidential candidates — I mean the acting president… Well, this is bad. Finally, it is harmful to the interests of his people and his state", Putin stressed.

World
US Not Ruling Out New Sanctions Against Russia Over Kerch Strait - State Dep't
According to Putin, it is possible to move forward without any provocations.

Putin considers that Poroshenko had increased his ratings at the expense of his country's interests and believes that this is a "bad method".

"The investigation is underway. After it is completed, it will be clear what to do with this", Putin said.

According to the president, the Ukrainian leadership was disappointed by the fact that none of the Ukrainian sailors, who crossed the Russian border, had died during the incident.

"Those who sent them hoped that someone would die. I see a great disappointment in the ruling circles [of Ukraine] that was caused by the fact that no one had died. They [Kiev] expected that some of them would die, but, thank God, this did not happen", Putin said.

On November 25, Ukraine's Berdyansk and Nikopol gunboats and the Yany Kapu tugboat illegally crossed the Russian maritime border as they sailed toward the Kerch Strait, the entrance to the Sea of Azov. Russia seized the Ukrainian vessels and detained 24 crew members after they failed to respond to a demand to stop.