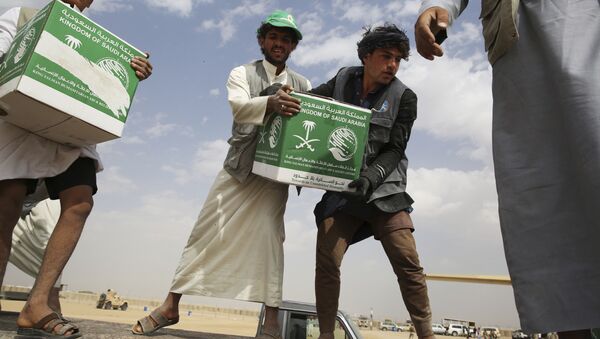 Sputnik: Your Excellency, I'd like to start with the impressive work of KSrelief in Yemen. Can you give an update on the center's assistance to Yemen? How much has been allocated in 2018 and what plans do you have for 2019? Will you increase aid?

Abdullah Rabeeah: Well, let me just answer this question by going back to Saudi Arabia's history with Yemen. For the past four decades, Saudi Arabia has been the main supporter for both development and humanitarian aid to Yemen, investing billions of dollars in economic support and development funding. In spite of the major challenges that face Yemen, there is hardly a city in the country that Saudi Arabia has not contributed in — be it a hospital, a school, a highway or any other important contribution to help the Yemeni people.

Over the past three and a half years as the conflict developed, Saudi Arabia has injected USD 11.2 billion for humanitarian aid, support for Yemeni refugees, development and support for the Yemeni economy and the Central Bank of Yemen, and we will continue to support Yemen in the future. For KSrelief itself, when we talk about pure humanitarian aid, the center has invested more than 80% of its work in Yemen over the last three and a half years — executing more than 301 projects at a cost of almost USD 1.7 billion into all parts of Yemen — irrespective of who controls the region. Saudi Arabia has equally supported Houthi-controlled and non-Houthi controlled regions, which is central to our impartial approach. In 2018, Saudi Arabia has invested in and executed projects approaching USD 1 billion; we expect that in 2018, we will continue at least at the same rate — maybe even more than what we have done in the past.

Sputnik: The Yemeni peace talks are set to start in a few days in Sweden. Do you support these efforts to solve the conflict? Will KSrelief or other Saudi representatives attend the talks?

Abdullah Rabeeah: Firstly, it's important to say that KSrelief plays no role in international diplomacy, and will not attend. However, Saudi Arabia has always supported peace talks, and by all means will be supporting the Sweden talks. Since the conflict started, Saudi Arabia pushed a lot for a peaceful resolution. Saudi Arabia has supported Kuwait One and Two, Geneva One and Two, and Saudi Arabia is full support of the talks that will be conducted — and will hopefully be successful in Stockholm, Sweden.

Sputnik: The fighting in Yemen has recently intensified near the Houthi-controlled city of Al Hodeida, through which humanitarian and commercial cargoes are received. To what extent has the work of KSrelief been affected by this escalation?

Abdullah Rabeeah: We are always closely monitoring the situation in Al Hudaydah — not only because of its importance to our aid delivery logistics. The city has been severely damaged by the conflict and we must support the thousands of residents who are in desperate need of aid. However, Yemen has nine seaports, five land ports and seven airports. Though Hodeida is logistically important, there are other very important means for supporting the Yemeni people. We've seen in the last several months how much the Houthi militias have interfered with the flow of humanitarian and commercial cargoes; even in Hodeida, there have been many documented delays and interruptions which have hindered the movement of commercial and humanitarian supplies. The work of KSrelief and other partners hasn't been delayed by the events in Hodeida, simply because we use all other ports and options at our disposal. Saudi Arabia has also opened its very big port of Jazan and also its land ports to allow KSrelief, the UN and other international NGOs to access Yemen. We think that with availability of those ports, we should be able to reach all regions in Yemen.

READ MORE: Vote on US Withdrawal From Yemen War Comes ‘Too Late,' But Still Sends Message

Sputnik: In other parts of the world, does KSrelief have any new humanitarian projects under development at the moment? When do you plan to announce them?

Abdullah Rabeeah: KSrelief, although it is a new organization (only 3 and a half years old), has managed to reach 42 countries globally, and we're expanding as we speak. There are many projects that are ongoing, and many others will also be executed over the upcoming months in many countries, including Syria, Iraq, Somalia, many countries in Central Africa, and assistance for the Rohingya in Bangladesh and Malaysia. We were also present to support Indonesia during their flooding crisis. So Saudi Arabia is working heavily through KSrelief to address all global humanitarian needs, based on international humanitarian needs assessments.

US Senate Votes to End Military Assistance in Yemen War
Sputnik: Since its establishment, the center has implemented projects in over 40 countries. Beyond the Middle East region, what is the KSrelief's focus right now? Do you plan to expand your work to more countries? Where?

Abdullah Rabeeah: The plan is to expand Saudi Arabia's outreach through its humanitarian arm, which is KSrelief; we will be responding to global humanitarian needs — whether they are man-made or natural crises or any other needs. As we now look at the role of KSrelief, we have already reached 42 countries; we expect this number to increase, and we will continue to be partners with the international community.

Sputnik: The United States said in October that the Small Group on Syria, which is made up of Egypt, France, Germany, Jordan, Saudi Arabia, the United Kingdom and the United States, would not provide any reconstruction aid to Syria until there is progress on the UN-led political process. Does KSrelief support this statement? How does it affect the ongoing projects of the agency that have already been implemented in Syria?

Abdullah Rabeeah: I think we support whatever the international community agrees upon, and Saudi Arabia is part of the international community. Doing development in Syria during a major crisis will be counterproductive, and KSrelief supports that concept. However, we will continue as a country and as a Center to execute our humanitarian work. Syria is the second country targeted by KSrelief's work. We still have many projects that we are executing, and we will continue to expand to meet humanitarian needs inside Syria. We are also one of the major players responding to the humanitarian needs of Syrian refugees in Jordan, Lebanon and Turkey.

Sputnik: The Kingdom of Saudi Arabia recently provided a financial contribution of USD 50 million through KSrelief to UNRWA in support of the activities in the West Bank and Gaza to replace some of the funding cut by the United States in August. Yet the UNRWA said that despite great efforts from the international community, there was still deficit of $21 million. Is it possible that Saudi Arabia may add funds in the future to close the gap?