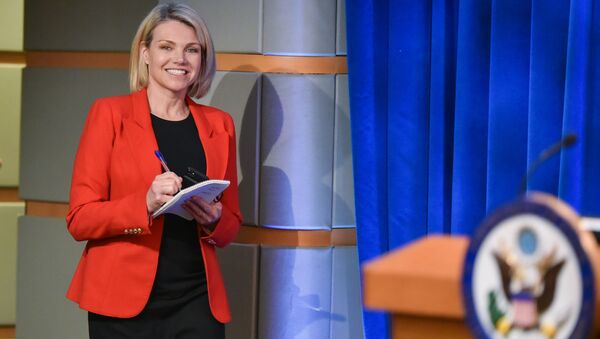 US Ambassador Nikki Haley, who has served at the UN since 2017, announced her resignation in October, stating that she would leave her position at the end of 2018.

President Donald Trump stated on Friday that the spokeswoman for the Department of State, Heather Nauert, will be nominated to become the 30th US envoy to the United Nations.

"I also want to inform you that … Heather Nauert will be nominated for the ambassador to the United Nations", the president told journalists during a meeting in the White House.

Nauert's Comments on Searches of Russian Properties 'Mock' Situation - Embassy
Trump described his pick for the UN post as "very talented" and "very smart", expressing his confidence in her success at her new position. He has previously mentioned her as being among the candidates for the post, stressing that she was under "very serious consideration".

Nauert, 48, is a former Fox News reporter, who became a spokesperson for the Department of State in April 2017.