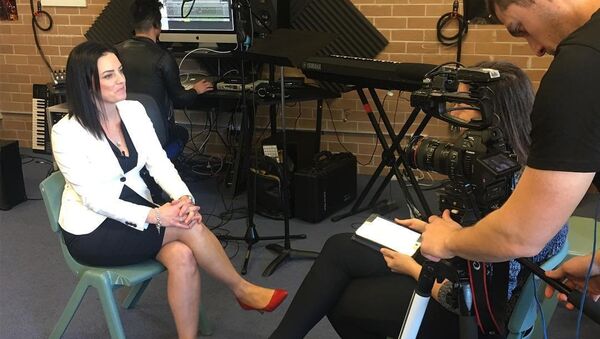 © Photo : emmahusarmp/instagram
Subscribe
The media report arrived shortly after an internal parliamentary probe was launched into Husar over sexual misconduct allegations, with the MP unable to respond at the time due to her confidentiality commitments.

Australian Labour MP Emma Husar has launched defamation proceedings against Buzzfeed, asserting that their false reports, “gross misrepresentation, and the slut-shaming smears” have ruined her career. The defamation suit would, according to her, aim to “to remind them that they are not above the rule of law in this great country of ours”.

Uproar as Australian Senator Slut-Shamed for Showing 'Boobs Hanging Out'

In a parallel move, she has vowed to battle in the upcoming elections for her Labour position as representative for the western Sydney district of Lindsay, despite announcing back in summer that she would not partake in the race.

An internal investigation into inter-party reality conducted by high-profile barrister John Whelan and launched after former staff made allegations of harassment, upheld claims of unreasonable management, but busted allegations of sexual misconduct, suggesting there is no evidence of that and there were no grounds whatsoever for her to resign.

However, the investigation into Husar’s office found that complaints that staff were made to perform non-work-related and personal duties for the MP appeared well-grounded.

Husar rose after question time on Thursday to declare she was “not a bully, I am not Sharon Stone, I am not a thief, and I did not deliberately misuse my work expenses.”

"During the last six months, I've had to bite my tongue and not defend myself publicly whilst being misrepresented”, Ms Husar told the House, adding she had been forced to resign, but would return and continue her political fight.

She stated that Buzzfeed knew about her being “bound by confidentiality” and unable to respond in kind during the probe, but it didn’t stop them from publishing the slut-shaming story with the full knowledge that it would rapidly make rounds on the internet.

“I will fight for my integrity, for my family, and for Lindsay, which is full of battlers just like me and fight for every woman who comes after me,” Husar said. “I’m going to do my bit, Mr Speaker, to ensure that this never happens again”.

In early August, Buzzfeed reported at length about allegations against Husar, of her bragging about whom she had sex with, sexually harassing an employee, and performing the revealing leg-crossing move made famous by Sharon Stone in the film Basic Instinct while speaking to a Labour frontbencher.

The MP declared in August that “enough is enough” and announced she had made “the agonising decision” to leave politics on her own terms.