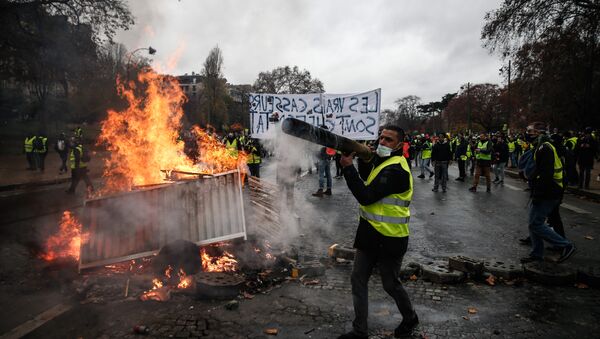 The French government has totally abandoned the planned increase in fuel taxes that have sparked massive, weeks-long protests across the country. The news comes one day after Prime Minister Edouard Philippe said the tax hike would be delayed for six months from its planned January 2019 rollout.

"The government is ready for dialogue and is showing it because this tax increase has been dropped from the 2019 budget bill," Philippe told the National Assembly Wednesday.

The new tax, intended to force drivers away from fossil fuel use, would have added the equivalent of over 30 cents per gallon to the cost of French petrol. Fury over the price hike on already-expensive gas sent hundreds of thousands of French citizens into the streets beginning on November 17 in what became known as the "Yellow Vests" protests, so named for the reflective safetywear all French drivers are required to own.

However, the disorganized protesters soon developed further demands, including the reinstatement of the solidarity tax on fortunes, which President Emmanuel Macron's government scrapped last year in favor of a tax on real estate that left financial assets untouched, and the removal of new, more stringent university admissions rules that students say infringe upon their universal right to an education.

The protests have seen widespread destruction of symbols of the rich, including high-end boutiques, luxury cars and patriotic monuments. Thousands of riot police have struggled to grapple with the protests, arresting hundreds of demonstrators and deploying rubber bullets and tear gas to disperse crowds.

Politicians on the right and left have both used the demonstrations as an opportunity to attack Macron's centrist government, which only enjoys a 25 percent approval rating. By comparison, the Yellow Vests' demands are supported by more than three quarters of French citizens. Both Marine Le Pen from the right-wing party Front National and Jean-Luc Melenchon from the left-wing La France Insoumise party have demanded Macron dissolve the National Assembly and hold new elections, while demonstrators in the streets have taken up the popular slogan "Macron resign!"