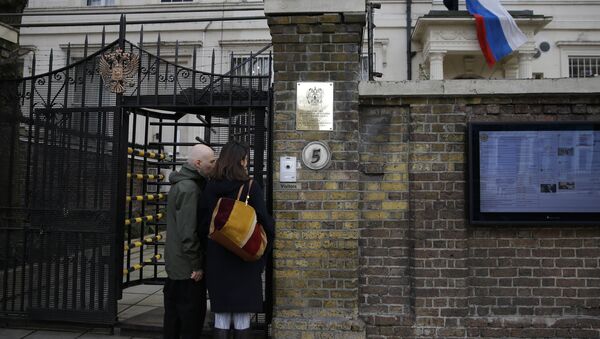 MOSCOW (Sputnik) - The United Kingdom seems to be seeking to expand its military presence in Ukraine in the run-up to the March presidential election in the country, the Russian Embassy in London said, commenting on media reports about the UK psychological warfare units allegedly stationed in Ukraine.

On Sunday, BBC News Russian reported that 1,200 servicemen of the British Army’s 77th Brigade, a top-secret unit that deals with electronic and psychological warfare, are currently stationed in Ukraine. According to the broadcaster, the UK servicemen in Ukraine have three main areas of activities: carry out military tasks on the Internet, as well as psychological and information operations.

Ukrainian Border Control Finds Radioactive Cargo in Odessa Port - Reports
"Earlier, we had information about the [United Kingdom] dispatching its military experts to train the Ukrainian military to conduct special operations against civilians of Donetsk and Lugansk. Now it turns out that the UK presence has expanded through, as BBC reports, conducting psychological and information operations in this country. As we see, it all happens in the run-up to the presidential election in Ukraine," the embassy said in a statement on Sunday.

If the information is correct, the new units represent a "new element of a large-scale UK military presence in Ukraine," the embassy noted.

"Once, the United Kingdom supported the coup in Kiev and the coming to power of the so-called ‘government of the winners’ in violation of the country’s constitution. Now we are witnessing a special operation, whose scale and consequences are yet to be assessed," the embassy added.

The British army's 77th Brigade is a combined regular and army reserve unit responsible for using "legitimate non-military levers" as a means "to adapt behaviors of the opposing forces."