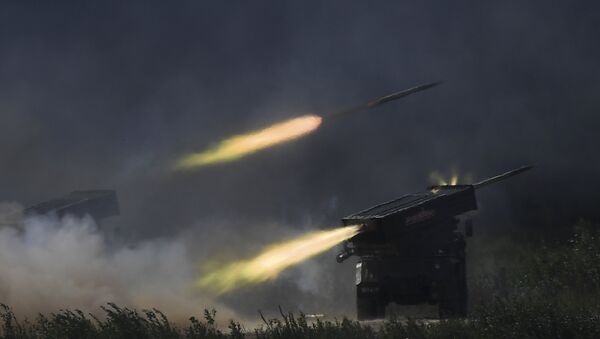 "If we look at first generation systems, be it Grad or Tornado, they, of course, possess some minimal tools of automation. It's difficult to determine the percentage of robotization in a particular complex or system. But I can say with confidence that the systems created in recent years, including the Tornado-G and Tornado-S, have already implemented components which can become the foundation for a promising robotized MLRS," Smirnov explained.

The director noted, for example, that the Tornado-G is equipped with an automated guidance and fire-control system, along with automated equipment for launch preparations and the launch itself.

"This allows us to automate the preparation process, and to control the guidance of the launch package, and the firing itself, and to carry out automatic topographic positioning and orientation of the combat vehicle on the ground, to remotely enter flight mission data into the fuses and launch projectiles without the crew having to leave their cabin," Smirnov said.

Hailstorm of Fire: What Makes Russia's Modern Day 'Katyushas' So Fearsome
Russian armament makers have a long history of success with rocket artillery systems, with the legendary WWII-era BM-13 Katyusha rightfully touted as the precursor of modern MLRS design. Since then, Soviet and Russian engineers have introduced a series of successively more powerful, accurate and deadly MLRS systems, including the BM-21 Grad, the BM-27 Uragan, the BM-30 Smerch, and most recently, the state-of-the-art Tornado-G and Tornado-S.
000000
Popular comments
There are some nice troops in Syria that are not supposed to be there and not invited by the Syrian goverment They are nice targets to obliterate for testing the new rocket systems. Since they are not supposed to be there nobody will be complain if you convert them to minced meat.

siberianhusky
3 December 2018, 02:07 GMT1
000000
The West has no idea how devastating Russian MLRS would be if they were foolish enough to attempt a ground invasion of Russia.