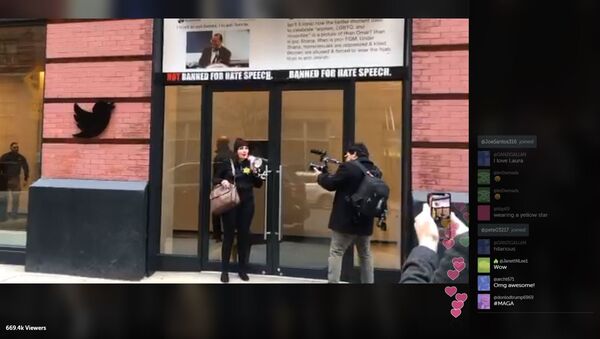 Far-right media activist Laura Loomer handcuffed herself to the front doors of Twitter’s New York City headquarters on Thursday for roughly two and a half hours in protest of her ban from the company’s platform.

Loomer, who is Jewish, once dated another alt-right media troll that goes by the name "Baked Alaska" even after he tweeted a picture of her in a gas chamber. She adorned her clothing with a yellow Star of David with the word "Jude" emblazoned on it as a hamfisted reference to the persecution of Jews during the Holocaust as she protested on Thursday.

Loomer was banned from Twitter last week over a tweet in which she accused Somali immigrant and newly elected US Congresswoman Ilhan Omar (D-FL) of being anti-Semitic and "pro-FGM," or female genital mutilation because she is a Muslim.

Previously, Loomer warned of dire consequences of "censorship" on social media, writing, "Censorship by BIG TECH is very dangerous. It can be deadly, actually. Many people suffer from depression. Including myself. What do you think a clinically depressed person will do when BIG TECH takes away their speech outlet? Suicide," she tweeted weeks before her ban.

On Thursday, Loomer and a group of people struggled with Twitter's security staff as they posted signs above the building's front doors depicting Loomer's tweets and as she handcuffed herself to the door handle.

After locking in, Loomer said over a megaphone that said she was standing "in solidarity with the millions of conservatives around the world who have been silenced."

"Twitter is upholding sharia when they ban me for tweeting facts about sharia law," she said.

Police said Loomer could remain locked to the doors as long as she wanted because Twitter had declined to press charges against her. She promised she would stay "as long as it takes" to get her Twitter account back but wound up calling it quits after just a few hours.

"You know, Twitter isn't the only thing for media," one officer told Loomer.