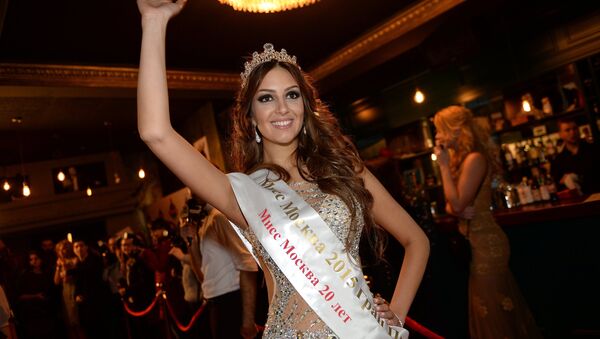 Miss Moscow title holder Oksana Voyevodina has become the first lady of Malaysia after marrying King Muhammad V, 49, in a lavish ceremony in the prestigious Moscow suburb of Barvikha after reportedly converting to Islam earlier this year, Islam News reported.

The 25 year-old doctor’s daughter, who won the title of Miss Moscow in 2015, has since travelled China and Thailand on modelling work, but the sultan hasn’t disclosed where exactly the pair met.

She is 24 years younger than ‘His Majesty’, an elected monarch who has been on the throne since 2016 and is frequently referred to by the short name — Yang di-Pertuan Agong.

During the royal ceremony and celebration, featuring the groom in national Malaysian clothes, namely a Malay tunic, whereas the bride wore a white wedding dress, no alcohol was served and all food was halal, which is in line with reports that the former beauty queen converted to Islam on April 16, 2018. She took the Muslim name Rihana and a picture of her in a hijab emerged on Twitter.

Malaysian media reported that she will be known in future as Rihana Oxana Gorbatenko, since the model has allegedly reverted to her father’s last name.

The king’s official residence has not yet released any official statement about the royal wedding, Malaysian tabloids have said, referring to the event as a ‘stunning Russian wedding’.

Shortly after she grabbed the Miss Moscow title, she described her school years as those of ‘a kind of bandit’, admitting she was obsessed with leisure activities such as skates, bikes, VMX etc. She went on to say at the time that she considered the stronger sex to be ‘the head of the family’, who ‘of course shall not earn less than a woman’.

At the time she won the Moscow beauty contest, she insisted she did not have a boyfriend because she hadn’t found the right man, who her heart would point to: ‘so far it is silent’, she added.

'I do not have a boyfriend,' she said. 'And I think that it would be harder for me to win, if I had. Because every boyfriend, if he let his girl go to the beauty contest, she won't be his girlfriend anymore’, she shared her relationship philosophy at the time.