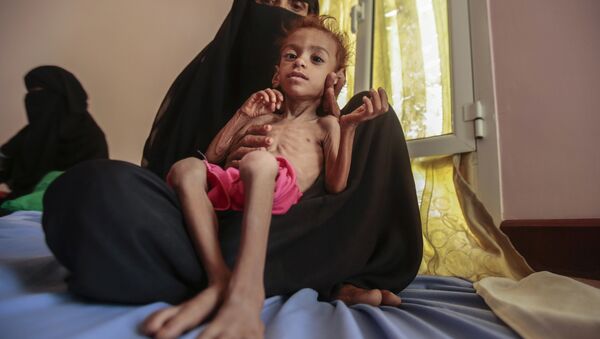 © AP Photo / Hani Mohammed
Subscribe
International
India
Africa
Five prominent international charities are urging the US government to stop its military support for Saudi Arabia and the coalition it leads in their devastating war on Yemen.

Doing so would save millions of lives, the International Rescue Committee, Oxfam America, CARE US, Save the Children and the Norwegian Refugee Council argue.

The coalition of charities says that 14 million people are at risk of starving to death if business continues as usual. That figure is supported by the United Nations Food Program.

The joint statement released Monday by the group follows one of the charities — Save the Children — reporting last week that 85,000 children under the age of five have likely starved to death in Yemen in the past three years, Sputnik News reported.

One of the groups — Oxfam — said it has reached "more than 3 million people with lifesaving essentials" to help them fight cholera — which has been widespread across Yemen as civil infrastructure has taken repeated losses — clean water, food vouchers and more.

Oxfam UK has also called on the British government to halt arms sales to Saudi Arabia as the coalition pounds the vital port city of Hodeidah, from where the majority of Yemen's food, 90 percent of which is imported, enters the country.

"Food should never be a weapon of war," the group said.

Another member of the charity coalition — the International Rescue Committee (IRC) — polled Americans, finding that a large majority of 75 percent oppose US arms sales to Saudi Arabia and the United Arab Emirates, the chief participants in the military coalition.

US support for Saudi Arabia is "fueling a crisis that has severe consequences for millions of civilians," IRC president David Miliband said.

If the US doesn't halt its military support of the war, "the United States, too, will bear responsibility for what may be the largest famine in decades," the charities said.

The United States has been a member of the Saudi-led coalition since the beginning of the war.