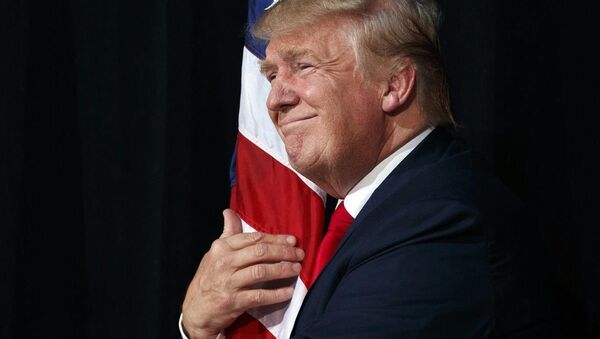 © AP Photo / Evan Vucci
Subscribe
International
India
Africa
Results of the US midterm elections are unlikely to change the Trump administration foreign policy as there is reportedly a general consensus among Democrats and Republicans regarding key foreign policy aspects.

However, a recently released book by journalist Bob Woodward "Fear: Trump in the White House," based on in-depth interviews with administration officials and staff, details an ongoing "nervous breakdown" in the White House, with senior officials concealing documents from Trump in an attempt to prevent him from signing them.

'Didn't You Guys Burn Down White House?': Trump Justifies Tariff War - Reports
One of the recurring subjects in Woodward's book is the bemusement of Trump's national security staff about the president's apparent disregard for world affairs and his disdain for the views of military and intelligence professionals.

Sputnik: What role does the emotional factor play in Trump’s decision-making process?

He prefers to go with what feels right without heavy reliance on evidence or even advice from his advisors. This is not quite the same thing as emotions, but it somewhat close. He is also prone to make decisions based on his sense of who his friends and enemies are.

No Arab State to Agree With Trump's Jerusalem Decision - Palestine’s Ambassador
Dennis Plane: I see no evidence that becoming president affected Trump’s character. Perhaps it has made him more concerned that others are out to get him, but it would be inappropriate to call this paranoia because there are, indeed, more folks out to get him.  That’s part of what being the president is about.

What becoming president has done is make the American public more aware of Trump’s character.  Thus, his character seems more relevant now than in the past, but I see no evidence of a shift in his character as president.

If anything, he has kept his ruthless business attitude in the White House—a place that is usually reserved for those with a more restrained approach.

Sputnik: It’s been reported that Trump refused to listen to the Khashoggi death tape. Could such emotional evidence impact his decisions regarding the issue?

Iran Sees No Point to Rouhani-Trump Summit After US Withdrawal From JCPOA
Dennis Plane: I wouldn’t say that he “refused” to listen to the tape. Rather, I would say that he decided not to listen to it.  He had a full transcript and description of the tape, so he opted not to take the uncomfortable step of listening to Khashoggi’s death on tape.  The only possible impact that listening to the tape could have would be to chill relations with the Saudi government, but he did not want to even entertain this possibility.

In this case, he went with the known benefit of maintaining close relationships with the Saudis rather than opening himself up to even the possibility of being persuaded by an emotionally gut-wrenching tape of the murder.

Sputnik: Speaking about psychological impacts, might Trump’s foreign policy be based on his own personal connections and impressions?

Most presidents take explicit efforts to separate their personal affairs from their role as president, but Trump has eschewed this tradition by putting his family members in charge of his vast empire. It seems likely that raw impressions rather than reasoned analysis of data drive Trump’s foreign policy.

World
Love is in the Air: Trump Says He 'Fell in Love' With Kim Jong-un (VIDEO)
He has praised Norway for the quality of its immigrants and Finland for its forest management practices, without seeming to have a complete grasp on how politics and society in either country works.

Sputnik: How likely is it that Trump is simply copying the sentiments of his voter base? Do you think that Trump would have behaved differently under other circumstances?

Dennis Plane: Trump is both leading his base and being led by it.  His embrace of pro-life policies is a clear example of Trump following his base. Yet in terms of immigration, Trump’s base seems to be at least somewhat following his lead.

The public was not concerned about the “caravan” of Central American immigrants until Trump starting to make a big deal out of it.

Views and opinions expressed in this article are those of Dennis Plane and do not necessarily reflect those of Sputnik.