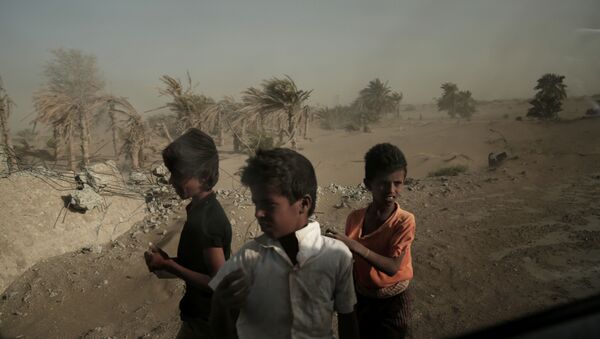 Approximately 85,000 Yemeni children may have starved to death in the past three years, the aid group Save the Children reported on Wednesday.

The group used data provided by the United Nations, saying that their figure of 84,700 children deceased may even be "conservative." The children counted in the study were all under five years old.

In mid-October, a photograph of an emaciated 7-year-old girl named Amal Hussein — Arabic for "hope" — was published by the New York Times and became a viral symbol of the atrocities the war on the country has wreaked on its citizens. In early November, Yemen's Health Ministry announced that the girl had died of starvation.

"Children who die in this way suffer immensely as their vital organ functions slow down and eventually stop," Tamer Kirolos, Country Director in Yemen for Save the Children, said in the report. "Their immune systems are so weak they are more prone to infections, with some too frail to even cry. Parents are having to witness their children wasting away, unable to do anything about it."

While the study looked at the death toll on children in the past three years, the war on Yemen by Saudi Arabia and its coalition partners, including the United States and the United Arab Emirates, is three years and eight months old.

The United Nations' World Food Programme says that 14 million people are at risk of famine in the country, a figure greater than the total killed in the Holocaust.

According to Save the Children, "that number has increased dramatically since the Saudi and Emirati-led coalition imposed a month-long blockade of Yemen just over a year ago." Commercial imports of food through Yemen's most vital port, Hodeidah, were reduced by 55,000 metric tons a month — enough to feed 4.4 million people, including 2.2 million children.

The coalition has been pounding Hodeidah with airstrikes for months at a steadily increasing rate, but even more recently, ground troops have intensified the battle in and around the city.

According to the World Health Organization, nearly 10,000 people, a majority of whom were civilians, have been killed in the war. Advocacy and human rights groups, however, say that the number could be as high as 50,000.

On Tuesday, Houthi government forces attacked fighters for the government-in-exile, which is backed by the coalition, in the center of Hodeidah city, casting even further doubt on the potential for peace talks in Sweden, a prospect both sides have expressed openness towards.