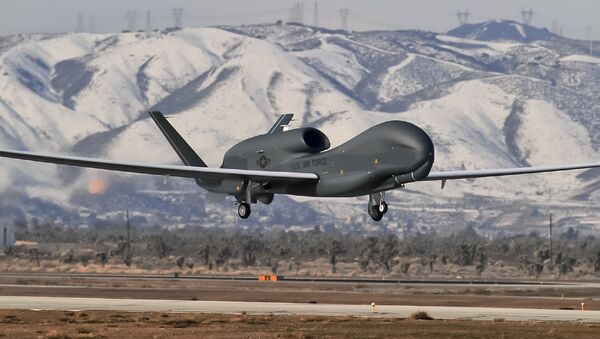 © AP Photo / GLOBE NEWSWIRE
Subscribe
International
India
Africa
A “permanent-war complex” has emerged since the end of the Cold War, providing defense contractors with a steady stream of revenue so the US military can fight small, endless wars, an investigative journalist told Sputnik Tuesday. Unmanned aerial vehicles have played a key role in this transformation.

As US President Dwight D Eisenhower departed the White House in 1960, the address he gave the nation famously noted the danger of a "military-industrial complex," calling it "the disastrous rise of misplaced power." That dynamic saw the magnification of costs associated with defence, research and development as part of the all-out drive to overpower the Soviet Union and its socialist allies in the Cold War. War industries became permanent entities, occupying large parts of the government's annual budgets and increasingly large parts of the US economy, too, especially in reliably pro-military congressional districts.

However, that dynamic has shifted since the end of the Cold War as a result of the "far-reaching privatization of US military and intelligence institutions in the two decades after the Cold War, which hollowed out the military's expertise and made it dependent on big contractors," historian, investigative journalist and political analyst Gareth Porter argues in a new article in The American Conservative entitled: "America's Permanent-War Complex."

Radio Sputnik's Loud and Clear spoke with Porter on Tuesday to discuss the findings.

​The second ingredient in the shift, Porter noted, was the rise of the global "war on terrorism" after September 11, 2001, which he says "quickly turned into a permanent war, much of which revolves around the use of drone strikes."

Indeed, the US War in Afghanistan, which started in October 2001, is still going 17 years later, with no end in sight. Some have begun to quip that soon, the war itself will be old enough to fight in the Army.

"What was a complex of private and public interests surrounding the Pentagon and the military contractors, which was for the purpose of keeping the money flowing into the Pentagon during the Cold War, but not particularly to maintain a state of war at all, has now become a system that is really addicted to, or depends on, the continuation of the set of wars that were started after 9/11, essentially. They're not the big wars; they're not the wars against major foes of the United States — quite the opposite. They are smaller wars that can be continued indefinitely, and that has become the whole point of the set of wars: to keep them going," Porter said.

"That's not the only thing the Pentagon does, but it has obviously become a huge part of it, and what I've argued here is that we have a process historically in which this complex that was for, essentially, a kind of permanent peace that could be turned into a short war, like Vietnam, has now become a system that is based upon the idea of continuing these smaller wars indefinitely, and it really is a process that was marked by privatization. And I'm arguing in my piece that it was, indeed, the rise of the military contractors that has set the stage for what I call the ‘permanent-war complex,'" Porter explained.

The rise of drone warfare has played a key part of this transformation, Porter told hosts Brian Becker and John Kiriakou.

"The drone wars are now of the essence of the permanent-war complex," Porter said, "because all of the wars — perhaps not all of them, but the key ones, the ones that have attracted the most US political attention and the ones that have caused the most casualties — are wars that involve the dropping off, or the firing of, weapons by drones. It has been the companies that have been involved in producing the drones, and particularly a relatively unknown military contractor called General Atomics, that have risen to the top of the heap in terms of these wars."

"What I show in my piece is that General Atomics, along with some other major military contractors, were, indeed, pulled into the actual fighting of the wars by the fact that the Pentagon and the armed services needed them in order to be able to carry out all the military functions that were involved in these wars, specifically around the drones," he said.

"A drone does not simply require somebody to push a button or to fly the drone. It involves a whole big team of specialists, including a lot of people who are required to analyze the images that are transmitted through this military system and to suggest when they think they have a target that is worth dropping a bomb on. That meant that there was a requirement that the military itself could not meet with its own personnel, so they had to count on contractors to provide specialists who could fill in all these specialized roles. That changed the basic nature of these drone wars from a war that was fought simply by the military to a war that was fought by the military and private sector contractors," which Porter argued had taken over "the primary roles in those wars."

This was why Porter argued, by 2016, the war in Afghanistan had become impossible to continue waging without drones. He further noted that increasing partnership between private contractors and intelligence agencies also drove this dynamic.

This transformation was so dramatic, Porter said, that by 2010, former Defense Secretary Robert Gates couldn't tell reporters how many of the contractors actually worked in the Office of the Secretary of Defense, the civilian section of the Pentagon.

Porter noted that this began a series of debates, not yet resolved, about whether or not those civilian contractors, who are typically based in the US, "are, in fact, liable legally for the consequences of the bombs that are dropped… There was a very strong case being made, in the Pentagon, by the military's own lawyers, that this was a dangerous precedent to set."

Kiriakou noted that no drone pilot had ever been prosecuted for mistaken deaths, though. He conveyed a story by a whistle-blowing drone pilot who disobeyed orders to fire during a dispute over whether a figure on his drone's camera was a goat or a child.

The size of those contractor firms, in turn, gives them significant lobbying power, which compels Congress to continue funding their projects, such as Northrop Grumman's RQ-4 Global Hawk reconnaissance drone, which the Pentagon no longer believed was worth the cost.

"This was most evident between 2011 and 2013 after congressionally mandated budget reductions cut into drone procurement," Porter explains in his article. "The biggest loser appeared to be Northrop Grumman's ‘Global Hawk' drone, designed for unarmed high-altitude intelligence surveillance flights of up to 32 hours."

"By 2011 the Global Hawk was already 25 per cent over budget, and the Pentagon had delayed the purchase of the remaining planes for a year to resolve earlier failures to deliver adequate ‘near-real-time' video intelligence," the article continues.