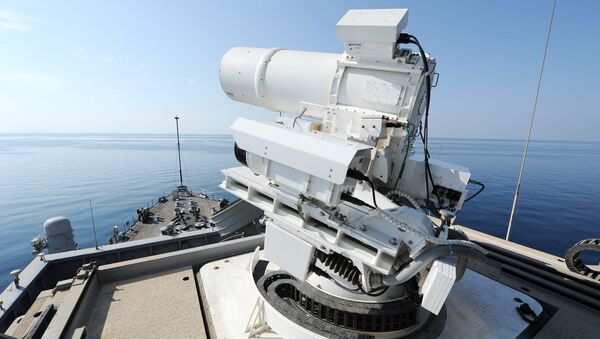 Defense Undersecretary for Research and Engineering Michael Griffin said at a Center for Strategic International Studies event in Washington, DC, earlier this week that he was pursuing "a renewed emphasis on laser scaling [meaning scaling up the power of lasers] across several technologies" in upcoming defense budgets, Defense One reported.

Griffin, who assumed his position in February of this year, brought his enthusiasm for lasers and satellites from NASA, the US space agency. Now, as head of research and engineering, he has the ability to draw on the Missile Defense Agency, the Defense Advanced Research Projects Agency (DARPA), the Strategic Capabilities Office and other research-and development initiatives to drive the quest for directed energy weapons forward.

"In my opinion, we are no more than a few years away from having laser weapons of military utility," Griffin said, noting that the present level of development of the technology was "within a factor of two or three of being useful on a battlefield, airplane or ship."

Griffin had also previously floated the idea of a space-based particle beam that could fry electrical systems in missiles shortly they're launched, but that's a bit further out, Defense One noted. In April, Griffin said that he believed some of the directed energy weapons were only five to six years away, and the satellite megawatt particle beam was within a decade of becoming a reality.

While it seems to be within reach, officials have made clear they aren't rushing the technology into production.

"My concern is with the current mania for fast," Andrew Hunter, director of the defense-industrial initiatives group at CSIS, told National Defense Magazine. "The idea that we can just suddenly get lots more technology development and maturity of technology happening without extra money, I think, is a fantasy."

"If the technology is mature, I think we can incorporate it into systems… in a more streamlined fashion by working on our processes," Hunter added. "But I'm a little worried that people are starting to think that there's just a process answer to the fact that we haven't put enough money into research and development."

The utility of the weapons must also be demonstrated "before you then put the big bucks in to go to a program of record," Acting Assistant Secretary of Defense for Research and Engineering Mary Miller noted at the National Defense Industrial Association's Army Science and Technology Conference late last month.

In early October, Deputy Secretary of Defense Patrick Shanahan told reporters the Missile Defense Review had been completed, but Griffin declined to comment on its status. It is anticipated to be released next month, although its findings are already being incorporated into the FY 2020 budget, Defense News reported at the time.

Still, Shanahan made clear that he doesn't consider funding missile defense to be a top priority, compared to, say, building a new aircraft carrier.

"Asking the Navy to prioritize an SM-3 system over another carrier, that's maybe not a fair question. Asking the Army to prioritize THAAD over another brigade combat team, maybe that's not a fair question," he said Tuesday. "Those are questions of the architecture of what our national defense looks like that maybe rise to the secretary or OSD [Office of the Secretary of Defense] level, not the responsibility of a given service."

Laser research also remains a low priority because for the most part, big-name defense contractors don't seem to be interested in buying the systems from small research firms or garage experimenters, according to David Stoudt, senior executive adviser on directed energy at Booz Allen Hamilton, who previously served as a directed energy engineer and executive in the US Navy.

Dependence on foreign suppliers is also putting a damper on laser production, as much of the rare-Earth metals necessary to build advanced laser systems primarily come from China — a key military competitor against whose weapons many of these new technologies are intended to be used, and with whom the US is presently engaged in an ever-escalating trade war.